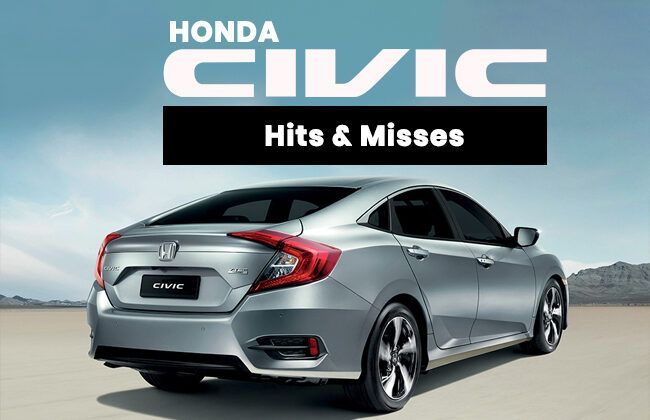 Don’t you think that the latest 10th-generation Civic is the best-looking Honda available in Malaysia? Even if we don’t take the Civic Type R, which is preposterously expensive, in the picture, the other variants of the Civic are quite attractive too. Kudos to Honda for pulling off such a dynamic design brilliantly. Following are the Civic variants with their prices-

As far as Honda Civic specs are concerned, there are two engine options available - 1.8-litre naturally-aspirated petrol engine and 1.5-litre turbocharged petrol engine. Following is a detailed table of the same-

There’s no doubt that the Civic is a phenomenal car and thus, there are numerous things that we like about it. We are mentioning some of them below-

Honda has simply nailed it with the new Civic’s style. No matter from which angle you look at this beautiful sedan, you would find yourself staring at it longer than normal. At the front, we have the sleek, sporty, modern, and indeed functional LED headlamps. These are accompanied by LED DRLs that make the car sportier. We also get Honda’s signature thick front grille and a very muscular and bold front bumper. Some of the other attractive exterior elements are-

The interior of the Civic is everything you would demand from a sedan of its type. There’s luxury, comfort, technology, sportiness, and premium-ness. And Honda has loaded it with umpteen features. For example-

As we mentioned earlier, the Civic comes with two engine options - 1.8-litre naturally-aspirated and 1.5-litre turbocharged - and both of them have healthy power and torque figures. For instance, the naturally-aspirated engine has 141 PS of max power and 174 Nm of peak torque; on the other hand, the 1.5-litre turbocharged petrol engine packs in more punch with 173 PS and 220 Nm.

You can judge Honda Civic’s safety by the fact that it has scored a perfect 5-star ASEAN NCAP safety rating. That means a lot and we’re glad that the Civic has achieved it. Some of its key safety features are-

Even though the Civic is one of the best cars in its segment, it still has its own set of flaws and drawbacks. Here are some of the things that we dislike about it.

The sloping roofline of the Civic does look fantastic; gives a coupe-like appearance. However, it negatively impacts the rear passenger comfort as it restricts the headroom. Even though it isn’t a big deal as people under 6-ft height wouldn’t mind it, the fact that it’s there is worth mentioning.

You must be wondering why we’re saying this because the Civic does have a 5-star ASEAN NCAP safety rating. Of course, it has. We are not denying it. We are trying to say that it lacks Honda’s Sense safety package which includes various active safety features like lane departure warning, adaptive cruise control, forward collision warning, etc. For a car of this price and status, Honda should have given that.

With the kind of sporty looks and features Civic has, it sure would be desired by many driving enthusiasts. All that horsepower and torque and low stance would make it a fun car to drive. However, it doesn’t come with a manual transmission, even as an option, which might be a turn off for some enthusiasts. Although to compensate for that, Honda did add a pair of paddle-shifters so we can’t really complain.