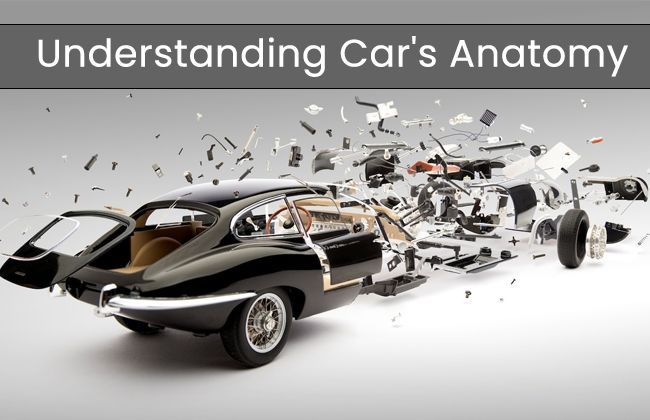 Automobiles are complex machines. A number of components, both small and large, go into the making of a car. All these components work in unison to give the car its mobility. Basic knowledge about your car’s anatomy not only helps you choose the right vehicle, but it also becomes easier to identify problems as and when they come up.

Let’s take some time out to learn about the important components of a car and how they work.

The powertrain is the system which moves the car. It comprises of the engine, which burns the fuel to produce the mechanical energy required to move the car. And the transmission system, which changes the gear differential and controls the power delivery to the engine. The powertrain often includes the fuel delivery system which comprises the tank, carburetors or fuel injectors, a number of filters, the exhaust system for removing the waste after burning the fuel, and the coolant which prevents the motor from overheating.

The battery is one of the most important components of a car. It helps in the ignition process. The battery unit is placed under the bonnet and can be identified with the positive (+) and negative (-) symbols. During an emergency, the red and black clamps of the battery can be sued to jumpstart the vehicle. Car batteries are self-charged through the alternator when the engine is running.

The radiator, like the battery, can be found in the car’s bonnet. The radiator is located close to the engine since its duty is to maintain the motor’s temperature. It stores the engine coolant which has to be changed after the car has run a few thousand kilometres.

It’s the skeletal frame on which the car is mounted. Some of the important components of the chassis include the steering apparatus which allows the driver to turn wheels and change the car’s direction; the suspension system which maintains the vehicle’s balance particularly on bumpy and undulating roads and stabilizes the steering wheel; the frame which keeps the car’s parts together; and the wheels.

The muffler is also known as the silencer and is a component of your vehicle’s exhaust system. It keeps the vehicle quiet while on the move. The muffler is located between the engine and the exhaust pipe at the back.

The axle transfers the output power from the motor to the wheels. It’s a vital part of the vehicle anatomy when you have to move or turn your car or apply the brakes. A problem with the axle may create loud clunking noises or cause vibrations all through the car especially when you apply the brakes or turn the car.

Most car components run on electricity. These include the on-board computer which micromanages sensitive components, the spark plugs of the engine, headlamps, dashboard and interior lights, and the audio system. A car gets the electrical power from the battery.

The importance of a car’s brake can never be overemphasized. The braking system comprises of the brake pedal, pad, light switch, calliper, and rotor. The callipers are located on the rear and front wheels, while the pedal can be found at the footboard of the car, in front of the driver. The pads actually help in stopping the car and needs replacement after prolonged use.

Cars are manufactured from a combination of metal, fibreglass, plastic, and similar other pieces. These are used to make the doors, hood, roof, windows, and the boot of the car. While metal is predominantly used on the outside, the cabin of most cars these days are made of tough, high-end plastic. A car’s body is aerodynamically designed to increase its fuel efficiency. That aside, manufacturers take particular care to make the car look visually and aesthetically pleasing.

A car’s cabin, like its exterior, has several components. The dashboard has analogue or digital display units that disclose important information regarding the status of the car. That aside, there are seats covered in fabric or leather. Most modern cars have controls for ventilation and fans to air-condition the heat. Climate control systems, instead of basic air-conditioning, are increasingly being spotted in most cars. There are also passive restraints like seatbelts and airbags.

Also Read: 10 Things to remember while taking a test drive