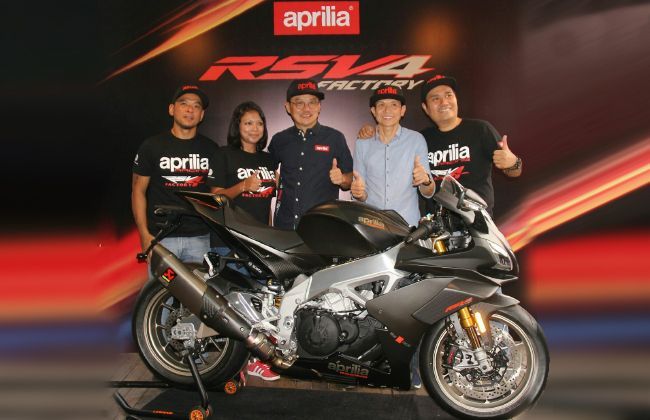 The superbike is fed by 4 Marelli 48 mm throttle bodies that have two injectors per cylinder. Also, it is controlled by ride-by-ride wire. The bike gets dynamic air intakes that optimise intake air velocity and volume for best power.

Though there is no standard exhaust on offer, the RSV4 1100 Factory comes with a race-ready titanium full system built by Akrapovic, exclusively for Aprilia. Its body is a mix of high impact plastic and carbon-fibre. The first six units of the bike for the local market are known to get carbon-fibre front brake air scoops at no extra cost.

Everything on the RSV4 1100 Factory is adjustable be it the steering damper, Ohlins 43 mm diameter, the TTX monoshock, or titanium-nitrided upside-down NIX forks. In addition, the bike is loaded with a whole bunch of riding aids like speed limiter, traction, launch control, and wheelie, and cruise control - they can be turned off entirely or configured independently. The rider can select between three riding modes while on the move - Race, Track, and Sport. Brembo Stylema four-piston monobloc radial calipers and radial master cylinder take care of the braking duties.