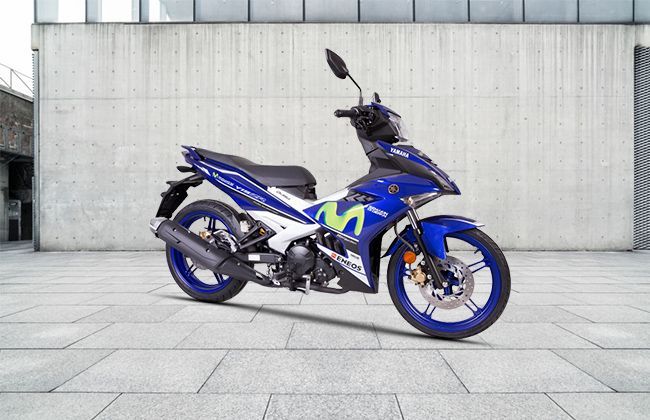 Yamaha has a decent lineup of underbone vehicles in Malaysia. Out of which, one bike that has garnered all the love and praise is the Y15ZR. Having launched in 2015 and revised in 2017 as a GP edition, the Yamaha Y15ZR broke the notion of underbone scooters referred as dull. Yamaha Y15ZR was then and still is one of the sporty mopeds available in the Malaysian market. No wonder why it impressed and attracted a series of customers.

The Yamaha Y15ZR packs a powerful unit under the skin to keep performance riders interested, a trendy set of features and a vibrant character that can’t be overlooked. What exactly does the Y15ZR has in store for the Malaysian buyers, let’s have a sneak peek into the same?

Designed and crafted to look vibrant from every angle, the Y15ZR has been blessed with sharp edges and modern-looking graphics. At the front, it gets a neat, creased cowl that constitutes a single halogen in the handlebar fairing and a pair of LED position lights with 8 mentols. The turn indicators are integrated into the cowl intelligently. Everything at the front seems to be well laid out, giving the face a cleaner look. The handlebar on the Y15ZR is wide enough to offer comfort while it is placed adequately for easy manouvering.
Over the sides, there are stylish graphics to grab attention while the rear section gets LED lights with optimum illumination, in the dark as well as during braking.

The seat is well-cushioned with a hump in the centre for extra rider comfort. While there is a grab rail at the back for the convenience of the pillion, who sits on a raised seat than the rider. Vibrations from the engine were felt through the seat, which is certainly not an amusing feeling on long-distance travels.

The instrument cluster comprises of a large analogue tachometer and speedometer placed on the left and an LCD display on the right. The essential readouts were clearly visible, including odometer, fuel gauge and more.

The Yamaha Y15ZR carries a single cylinder, 4-stroke, liquid-cooled SOHC 149.7cc engine that churns out a max power of 15.3 PS at 8,500rpm and a peak torque of 13.8Nm at 7,000rpm, mated to a constant mesh 5-speed gearbox. The power delivery from low to medium gear ratio gives it considerable acceleration and helps it perform better in the real world. Accelerating the Y15ZR was not at all a concern. The clutch engagement was easy, quick and responsive, letting the Y15ZR shoot off. Upon engaging the third gear, slight vibrations were felt through the handlebars, something which Yamaha could improve on.

Feel of riding the underbone Y15ZR

For a two-wheeler to offer good ride quality, it’s important for it to have right positioning of the components and for that matter what grabbed our attention was the footpeg placement. It is as good as a rider would like it to be.

The small underbone rides on the telescopic front forks and swingarm rear suspension unit that handled road imperfections quite nicely. Braking duties on the Y15ZR are handled by hydraulic disc at both the ends that offered good bite and feedback. The braking setup did an excellent job in case of hard braking.
With the largest-in-class 120/70-17M/C rear tyre fitted on the Y15ZR, managing the tight bends, curves, corners, and turns, was only the slightest of effort. The acceleration was good throughout the rev range. The racing DNA that Yamaha is known for putting in its vehicles was clearly felt while riding this supercub.

It was fun riding the Y15ZR on straight planes as well as on the twisty roads. It seems that the Y15ZF is a worthy offering from Yamaha which is not only practical, stylish and thrilling but quick to respond and accelerate. Above all, it's a peppy machine ideal for everyday commuting.

Compared very closely with the Honda RS150R, the Yamaha Y15ZR holds an upper hand in terms of city maneuverability and handling. While the former gets all the importance due to its stability on longer routes. So, if you are someone on the lookout for a 150cc underbone vehicle with the primary purpose to ride in the congested city traffic, put your money on the Yamaha Y15ZR.