KUALA LUMPUR: SM Sport Malaysia has launched 2019 SM Sport E110 along with the Benelli 150S and 502C in the home market. The budget motorcycle is based on the SM Sport 110R, which was launched on July 2017 and was made by a collaboration with MForce Bike Holdings – Benelli’s local distributor, Qian Jiang Motorcycle (the owner of the Benelli), Keeway, and SYM.

2019 SM Sport E110 is equipped with a 109 cc engine that uses carburettor fuel injection system. It is capable of churning out a maximum power of 6 hp, which comes at 7,500 rpm, while the peak torque is 7 Nm coming at 5,000 rpm. The engine is mated to a four-speed automatic gearbox.

To make the two-wheeler more affordable, the braking system has been tweaked a bit. As known to us, the SM Sport 110R uses the disc brakes at the front and drum brakes at the rear but the SM Sport E110 come with drum brakes on both the front as well as the back. Furthermore, the two-wheeler is equipped with 17-inch alloy wheels just like the base model and the units get 70/90 tubeless tyre at the front and 80/90 tubeless tyre at the rear.

Despite the low price, the street runner gets key features like an anti-theft key lock, Kayaba suspension, electric and kick starter. It comes with 4-litre fuel tank and the dry weight is 100 Kg. The seat height of the two-wheeler is 760 mm. Speaking of the colour options, there three schemes-

2019 SM Sport E110 comes with a price tag of RM 3,488, which does not include the road tax, registration and insurance. The delivery of the budget two-wheeler will start from the end of October. 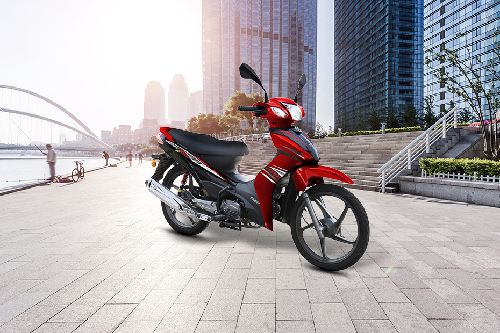