Kawasaki Z250 ABS - All a buyer needs to know 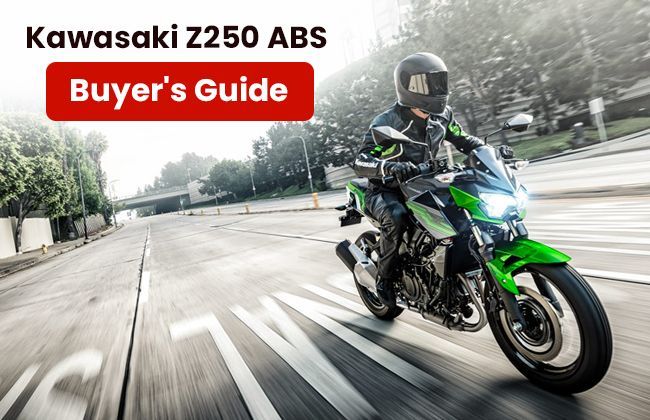 In Malaysia, the 250 cc motorcycle segment is always blooming. Apparently, we love such motorcycles and that’s one of the main reasons why more and more brands have stepped into the country with their finest of 250 cc products. Out of the many, the Kawasaki Z250 ABS is among the best one available. If you are planning to buy one, here is everything that you need to know.

Unlike most of the other 250 cc motorcycles like the KTM Duke 250, Honda CB250R, etc., the Z250 ABS is powered by a twin-cylinder engine. It is a 249 cc liquid-cooled engine which churns out 37 PS of max power at 12,500 rpm and 23 Nm of peak torque at 10,000 rpm. It is a high-revving engine which means that if you really want to enjoy riding this bike and experience the true potential of the engine, then you would have to ride it at higher revs where the engine is the liveliest. This twin-cylinder engine configuration is one of the main USPs of the Z250 ABS over its competition.

Kawasaki has implemented its Sugomi design language in the Z250 ABS. This made the bike look very much like its elder Z brothers and sisters. The front end features a new twin headlight setup that looks very attractive, aggressive, and sporty. The tank scoops are new with sharp lines and design. The tail section of the bike is also upgraded and raised a bit to have the sporty stance that the bike deserves.

We are glad that Kawasaki has used LEDs in the dual headlamp setup of the Z250 ABS. These lights offer a significant increase in the brightness when compared to the conventional halogen bulbs. Also, they have a wider spread covering a larger part of the road ahead. LEDs also consume less energy, so they are good for the battery as well.

It is not just the styling that the Kawasaki Z250 ABS has adopted from the bigger Z models. It also comes with a familiar compact and multi-functional instrument console which we have seen in the Z650. This console features an analogue-style tachometer which redlines at 12,000 rpm. Below it is a screen that displays various information like gear position indicator, speed, odometer, and much more. The console also has various tell-tale lights.

Kawasaki Z250 ABS specs also list the inclusion of an assist and slipper clutch. So what it does is that it lightens the clutch lever pull by 20%. Also, it helps prevent rear-wheel from locking under hard and aggressive downshifts. So you don’t need to worry about losing your rear end, especially on a race track.

The Z250 ABS has a trellis frame similar in design to that of the Ninja H2. The engine is also used as a stressed member. This enhances the overall handling characteristics of the bike. The frame is also quite lightweight. In fact, the whole bike weighs just 165 kg. For a twin-cylinder motorcycle, that’s quite impressive. Also, the upright riding stance doesn’t stress out the rider quickly, thus, he can push the bike to the limits. All these features make the Z250 a great handler, an important character a naked motorcycle should have.

The saddle height of the Z250 ABS is 785 mm (when radial tyres are fitted). This is one of the reasons why this bike is loved by most of the short riders. Getting on and off the bike is easy, handling it in busy traffic is easy, and it also gives the rider confidence to ride the bike around without worrying about dropping the bike.

Another area where the Z250 ABS excels is braking. It comes with a large 310 mm semi-floating front disc. Both the initial bite and progressive braking are phenomenal. Kawasaki has used a high-quality master cylinder and brake lines to provide such a strong braking performance. And to top it off, the bike now comes equipped with ABS from Nissin enhancing the overall braking efficiency.

Kawasaki Z250 ABS price of RM 21,998 makes it an expensive 250 cc motorcycle but it has certain advantages over the other bikes in the segment. We think that the biggest advantage of all is its twin-cylinder engine which provides refinement levels that you wouldn’t find in any single-cylinder bike of this capacity.