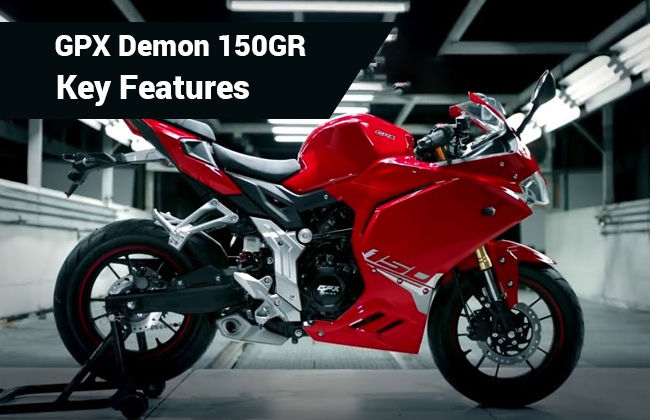 Thailand based motorcycle manufacturer GPX is ready to enter Malaysia with a bang. Since its inception in 2007, the company has been growing at a rapid pace and has its presence in several south-east Asian countries like the Philippines, Singapore, Cambodia along with Thailand. One of the key models amongst their launch plan is the Demon 150 GR. The mini bike is soon expected to hit the Malaysian market and it will be very interesting to see how it stands against the other participants of the segment. That said, here’s a close look at what the new GPX 150 GR has on offer:

This is one aspect which raised a lot of eyebrows. At first glance, the Demon 150 GR looks exactly like the Ducati Panigale. Designed as a mini bike, the Demon 150 GR features a sharp LED headlight with DRLs and a high windshield upfront. It comes with a fully digital instrument console below which there’s a small USB charging port to charge your electronic devices. The high fuel-tank is perfect for a sports bike kind design and the bike gets full sporty fairings. Split seating features a slightly elevated pillion seat which is very tiny and may not be comfortable for pillion riders, while the grab rail is integrated into the rear body itself.

The tail looks sharp and sleek with LED tail light and small turn indicators. The timid exhaust is neatly tucked under the body. There’s minimum use of graphics on the bike which keeps the design neat and tidy. Adding to the sporty design are the 10-spoke black colour alloy wheels shod with wide tubeless tyres and the copper coloured front forks which complete its sporty look. There are three basic colours to choose from- red, black and white.

Developed as a mini bike, the GPX Demon 150 GR draws power from a 149cc, four-stroke, single-cylinder, air-cooled engine. Although GPX has not officially revealed the power figures yet, we aren’t expecting a surprisingly out of the box power performance. The engine is mated with a six-speed gearbox to transfer power to the wheels. Considering the fact that the bike has a full fairing on the body, a liquid-cooled engine would have been more apt in comparison to the air-cooled one. GPX has equipped the mini bike with an electric start system and they claim it can clock a top speed of 125 kmph.

GPX has built the Demon 150 GR on a trellis frame and has equipped it with KYB upside-down front forks and a monoshock at the rear. The seating is placed at 780 mm from the ground, while the pillion seat is slightly higher. Besides, it is very small and uncomfortable. With narrow clip-on handlebars and a high set seat, the rider sits in a leaning position with the legs hugging the fuel-tank. Seating is a bit tight with small stepped seat and position of the foot pegs.

With a kerb weight of 130 kg, it is agile enough for easy manoeuvring. Moreover, the 14-inch alloy wheels shod with thick 120/70 front and 140/70 rear tubeless tyres help in a better on-road grip and stable riding experience. GPX has fitted the bike with disc brakes at both ends, however, ABS is missing.

It is speculated that the fully-faired sports bike will retail at around RM11,000 once launched. That’s not a bad price for a mini bike that is offering a bucket full of features along with stylish looks and decent performance.