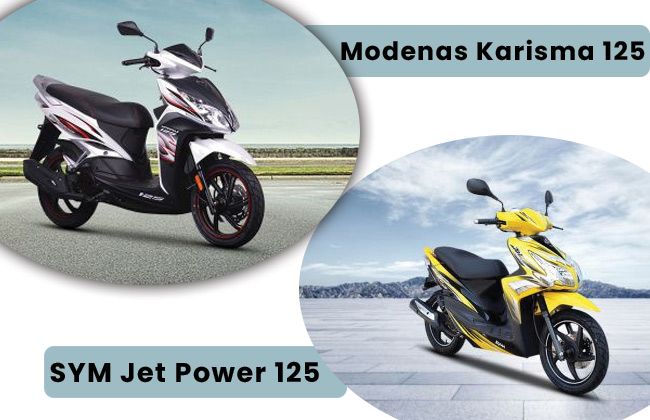 When it comes to buying a scooter on a budget, the Taiwanese have everyone beat. Offering 125 cc scooters at prices below RM 5000, these companies pose tough completion to the established Japanese motorcycle manufacturers. Two of the biggest names in this segment are in fact Taiwanese by origin. The first is the SYM Jet Power 125. The other is the Modenas Karisma 125, which is originally made by Kymco and sold in other markets as the Kymco Ace 9 or Super Z. By the looks of it, both of these scooters seem to be very evenly matched. But which is the better scooter to buy? Let’s find out.

Both the scooters are automatics and powered by a 124.6 cc air-cooled and carbureted SOHC engine. They come fitted with both an electric and a kick starter. The SYM produces 8.4 hp at 7500 rpm and 8.6 Nm of peak torque at 6500 rpm. The Modenas Karisma 125, on the other hand, produces a slightly higher output of 9.4 hp at 7500 rpm and 9 Nm of torque at 5000 rpm. However,  the Modenas is slightly heavier at 113 kg while the SYM weighs just 106 kg. With this difference in weight, the slight power advantage is nullified. Still both the bikes are able to reach speeds on the better side of 105 kmph.

SYM also claims that their scooter will do 43 kmpl which is right up there with the best mileages offered in the segment. The Modenas, however, takes it up to 50 kmpl and even higher. This leaves he SYM Jet Power’s fuel economy figure in the dust. With similarly sized fuel tanks at 4.5-litre, the Karisma should definitely give you the better range.

Styling matters just as much, if not more than the engine, performance, and mileage for scoters like these. Both the SYM and the Modenas keep the fight heated here too. These scooters are similarly styled with a design emphasis on curves. Both have large dual halogen headlights, alloy wheels, and cool dual tone color schemes. But yet again it is the Modenas Karisma that is the better looking of the two. The design feels more modern and better throughout.

The Karisma’s lines give it a more attractive profile. It also gets a very unique slim LED tail light cluster. The rear footrest is better integrated with the rest of the design. The red stitching on the seat too helps. The only sore point is the grab rail that looks like a car spoiler. The SYM Jet Power also cuts a pretty picture just not as contemporary as its Taiwanese competitor. Special mention goes to the way its grab rail is integrated to its body lines and the gigantic tire hugger.

Moving further down the specifications, we come to the suspension. Both the scooters get uncannily similar suspension setups with telescopic front forks and a unit swing arm using a single side mounted shock absorber. They are equipped with a disc brake on the front and a drum brake for the rear.

You may think that this comparison is over and the decision is already being made. But now we'll discuss the many features and conveniences that each scooter comes with. This is where the real character of the two scooters is revealed. The SYM comes with an underseat storage compartment that can be opened by pushing a button near the handlebar. The storage space is big and can easily hold a full face helmet. The Modenas Karisma 125 also comes with an underseat storage that can store a full face helmet and then some. The Karisma’s storage space however is bigger than the Jet Power’s. This is because unlike the Jet Power, the Karisma’s fuel tank is under the footboard.

The wide and fat floorboard is, therefore, higher and gives a more relaxed seating position. Not only that, this means that in the Karisma, the seat does not have to be lifted every time the rider wants to have a fuel refill. In fact, the fuel filler on the Karisma is on the apron under the handlebars. The Karisma also comes with some additional storage on the apron that can be used to store a water bottle. Then there is the USB charger and the sturdy clip that can be used to charge your phone on the go.

With similar build quality and service availability, the Modenas clearly comes out to be the better scooter. The SYM Jet Power 125 does sell for cheaper at RM 4748 compared to the Modenas Karisma 125’s price of RM 4980. But the Modenas is easily worth the RM 200 price difference. So, which one do you like more? 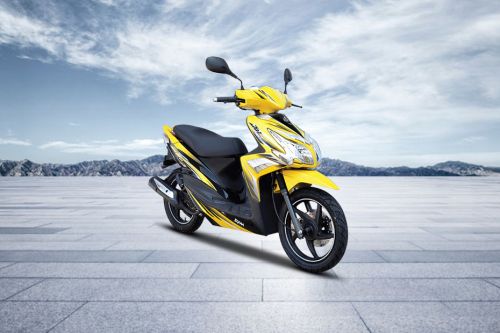