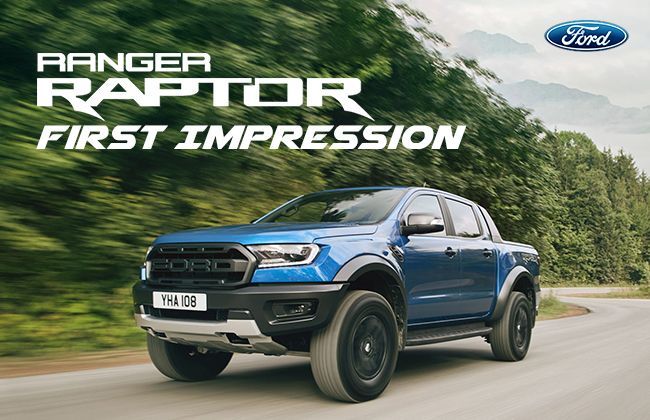 The all-new Ford Ranger Raptor has been recently launched in Malaysia. After keeping us waiting for a really long time, Ford finally brought the much-awaited pickup truck at the Kuala Lumpur International Motor Show (KLIMS) 2018. Just reading about the features of this new pickup truck made us go weak in the knees, and now that it is actually here in flesh, we are so impatient to get our hands on it. But until that happens, here is our first impression of the brand-new Ford Ranger Raptor.

Ford has really hit the bull’s eye this time. The new Ranger Raptor looks phenomenal. Although it belongs to the 2018 Ford Ranger series, it is so much different than its other siblings. Ford has made certain changes to make sure that the Ranger Raptor doesn’t blend in with the rest of the pickup trucks. At the front, there is a large black grille with ‘FORD’ written all over it in big bold letters. The projector headlamps accompanied by the strip of LED daytime running lights look quite aggressive. The massive bumper appears to be very sturdy and stylish. The bonnet has got certain design elements that pull out that beastly look of the truck. Add all this up and you get to have an intimidating visual appeal.

The beefier look continues towards the side of the Ranger Raptor. The high ground clearance and large space in the wheel arches give this truck a slightly higher stance than the others in the segment. As of now, the Ford Ranger Raptor color options are limited to only two - Lightning Blue and Conquer Grey - and both of them look brilliant.

Another area where Ford has worked hard to ensure there is no margin for error is the interior of the Ranger Raptor. It is superbly done. There is lots of space to move around. The sports seats are nicely bolstered and provide a good support and comfort. The use of materials appears to be of very high quality. The steering wheel is covered in leather and has this unique red centring strip at the top. Ford says that this will help in monitoring tyre direction when drifting and cornering.

Just like other Ford models, the Ranger Raptor too comes with Ford’s SYNC 3 system. This uses 10,000 natural voice commands to make calls, play music, and change the cabin temperature. Apple CarPlay and Android Auto seamlessly connect to SYNC3, so you can use your favourite apps on the go. There’s also an 8-inch touchscreen that supports

The Ford Ranger Raptor specs boast about the 2.0L Bi-Turbo engine that churns out 213PS of power and generates 500Nm of peak torque. Ford has finely calibrated the engine to match the slick 10-speed automatic transmission that comes with PaddleShift technology. To help you fight different kinds of terrains, there is Ford’s 4x4 system and the Terrain Management System which offers six driving modes - Baja, Sport, Grass/Gravel/Snow, Mud/Sand, Rock, and Normal.

So, yes, that was it; our first impression of the new Ford Ranger Raptor. And we must say that we are quite impressed by it. Ford’s idea of bringing a pickup truck that can tackle off-roads without breaking a sweat, is really going to make other manufacturers worry a bit. Ford Ranger Raptor price has been set at RM 199,888 and it offers so much that you wouldn’t complain about the money you are spending. Ford has really given birth to a new breed.