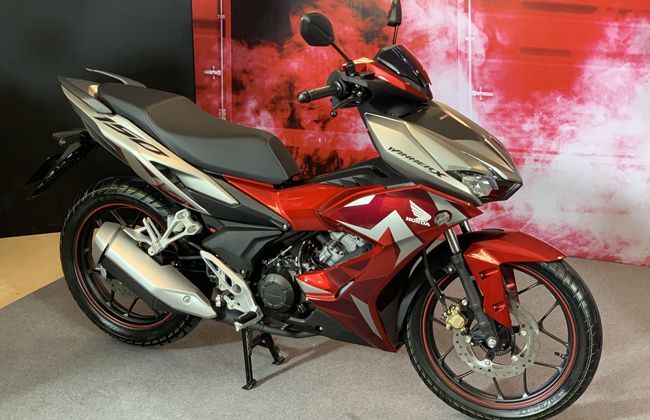 KUALA LUMPUR: Honda has launched the all-new Winner X in Vietnam, the bike in Malaysia is known as RS150R. In the local market, it rivals the fairly popular Yamaha Y15ZR. Honda launched its new 150cc supercub at the My Dinh Stadium in Vietnam.

At the launch event, Honda didn’t reveal the detailed specifications of the Winner X, the sales, however, will commence from 16th July 2019. All the information given here has been sourced from Honda Vietnam official website, as it now lists the 2019 Winner X.

Compared to the previous-gen model, the new Winner X benefits from a revised overall bodywork. The headlight now houses an LED unit and is located at the front cowl. The tail light now resembles the design of the ones seen in large Honda motorcycles and are wider as well. While the exhaust system looks shorter than before, the new Winner X retains the same alloy wheels as before.

On the safety front, the Winner X has taken a big leap forward in the form of the inclusion of Anti-lock Braking system on the front wheels. However, Honda Vietnam is also known to offer a non-ABS version at a lower cost. The non-ABS Winner X will come equipped with the company’s combined braking system that activates both the front and rear brakes in proportion during the course of hard braking.

Another noteworthy detail is the inclusion on a full-LCD instrument panel that looks like the one seen on the CB150R. This unit displays information like - fuel level, rpm, clock, speed, odometer, and gear position. The now small appearing tail lights get LED lighting, and so does the turn indications below them.