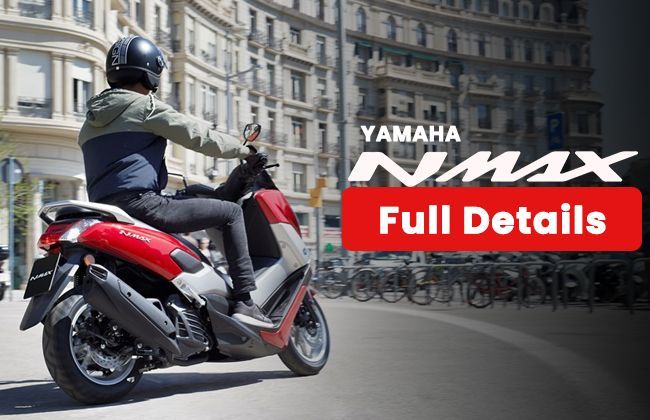 Yamaha, a popular Japanese bikemaker, had brought the Nmax in Malaysia in 2016 and, since then, the maxi-scooter has become a household name. It holds a premium design based on the Yamaha T-MAX. The technology that the commuter has got is quite impressive. Furthermore, the presence of the 155cc Blue Core Engine, with VVA technology, makes it stand out from the crowd. The popular Nmax gives a tough competition to the segment leader, like Honda PCX. Let’s discuss the in-depth details below.

Unlike the neighbouring country (Indonesia), the Malaysian-spec Yamaha Nmax is available in one variant only that is priced at RM 8,409.

As mentioned above, the Yamaha Nmax borrows most of the styling cues from TMAX. The scooter features a gigantic windshield at the top of the front end. The seat has the spring-fitted hinges that are the main reasons behind accessing the storage compartment more conveniently.

The Yamaha Nmax specs sheet includes LED headlights, along with rear brake lights, which provide a clearer and brighter illumination during riding. The scooter comes with a full LCD instrument panel with a modern design. It has a seat height of 765 mm, which is quite good for buyers of all height. There is an under-seat compartment too, where one can store a helmet or other things.

The ground clearance of Yamaha Nmax is quite good at 135 mm. It is built with a wheelbase of 1,350 mm that makes the ride easy in heavy traffic too. It rides on the 13-inch wheels wrapped in 130/70 tyres at the back and 110/70 tyres at the front. The bike comes with 6.6-litre fuel tank, which is decent for long riding hauls.

The scooter comes with a telescopic unit at the front, while the rear section is taken care of by the twin shock absorbers.

The Powerplant and Mileage

The Yamaha Nmax comes with 155cc single-cylinder, liquid-cooled, 4-stroke, SOHC, 4-valve, which is one of the major highlights of the scooter. It promises to deliver a maximum power of 14.9 hp along with a peak torque of 14.4 Nm. Both the maximum power and torque come at a rev range of 8,000 rpm and 6,000 rpm respectively.

The engine is quite good to offer a smooth power delivery system and has a brisk acceleration. The top speed of the maxi-scooter is 124 kmph. The motor has Variable Valve Actuation (VVA) technology, along with the Continuous Variable Transmission (CVT).

The engine is also assisted by Yamaha’s Blue Core technology too, with the help of which the scooter can provide high power without disturbing the mileage. It is capable of providing a mileage of 30 kmpl.

The Yamaha Nmax has disc brakes at the front as well as the rear to perform the stopping duties. There are 230 mm hydraulic disc units along with the single-piston calipers and for a commuter, like the Nmax, these are at par. However, the presence of ABS could have been a plus point in the braking department. According to the manufacturer, the ABS is not offered as it wants to keep the price low. While there are some rumours that an ABS variant will be provided soon, nothing has been confirmed yet.

Which is better, Yamaha Nmax or Honda PCX 150?

However, on the other hand, after the introduction of the Yamaha Nmax, the tables have turned, though the huge price difference might be the main reason. Compared to the RM 8,409 of Yamaha Nmax, the Honda is priced at RM 10,999, the features being almost the same.

Major drawbacks to look for

After launching in 2016, the design of the Yamaha Nmax has not been modified until now in the country. So, the design is old dated and may draw down the bike in the modern styling comparisons. Also, the under-seat storage of the Nmax is not big enough to accommodate a full-face helmet. The two-wheeler also misses out on an ABS variant even though a lot of ASEAN countries, like the Philippines and Indonesia, have the luxury.

The Yamaha Nmax is a great maxi-scooter and is known for its powerful engine. The impressive power figures and the affordable price tag are the USPs for its success, despite belonging to a segment that has a crowd-puller in the form of Honda PCX.

Also read: Yamaha Nmax or Yamaha Xmax: Which one to buy?