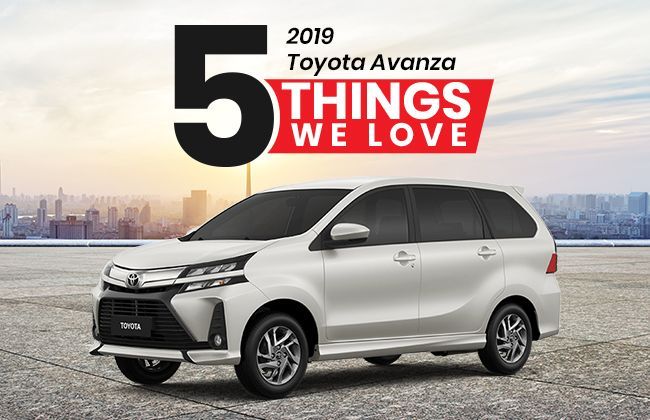 The 2019 Toyota Avanza has been garnering much attention in Malaysia since it went on sale recently. Mechanically identical to its predecessor, the 2019 model is more of an incremental update by way of a pretty convincing facelift. Just as before, however, the new Toyota Avanza will go up against the likes of the more affordable Perodua Alza, better-looking Honda BR-V, and the remarkably well-priced Perodua Aruz.

As of now, the 2019 Avanza is sold in three different trim options which include the base E trim at RM 80,888, mid-option 1.5S at RM 83,888, and the top-spec 1.5S+ at RM 87,888. After a few years of neglect, the Japanese automaker has finally taken the case of its popular compact MPV seriously, and it shows. The 2019 Toyota Avanza is the best it has ever been, and ready to battle it out with its competitors. Having said all that, here are 5 things that we love about the new Avanza.

While this is not much more than a well-organised and executed facelift, the end result is still quite remarkable. As with almost any car, the front end styling is one of the most crucial and can make or break a deal at the showroom. Starting up front, it’s clear that Toyota designers were very impressed with the facial styling of the far more expensive Vellfire. Therefore, now, the dullness and lack of excitement that was the old Avanza, has been cast aside in favour of sporty aggression. The neatly sculpted face incorporates a split design for the front lights, with the top portion assigned to the actual headlights, while the bottom bit houses the turn signals and running lights.

Connecting the main lights on both ends is a seemingly continuous strip of body trim, while there’s a large piece of chrome garnish in the middle with the Toyota logo. The sporty looking bumper houses the lower section of the front grille and is garnished with glossy black trims for added style. The fog lamp housings along with the front splitter also look stylish. Same goes for the muscular clamshell bonnet. The new alloy wheels, sculpted door mirrors, and body-hugging side skirts also look great. The revamped backend now features a roof-mounted spoiler, modified tailgate design with static reflectors and a thick bar of chrome, plus a tweaked tail lamp cluster and some sporty trim on the now prominent rear bumper.

The subtle and the obvious improvements that Toyota has made to the interior of the 2019 Avanza make it a better car than before. The most glaring styling change can be seen when you peek at the centre stack area. The jaded head unit of yore has been replaced with a brand-new, modern system - a 6.75-inch touchscreen unit which supports Android Auto & Apple CarPlay, along with Bluetooth and Wi-Fi connectivity. Further down, you’ll also notice the upgraded HVAC panel which houses the controls for the 2019 Avanza’s new automatic climate control system. The whole centre stack now also features a matte silver surround, which adds to its appeal. Toyota has now also brought down the noise, vibration, and harshness levels inside the cabin for extra comfort.

One of the most significant add-ons to the 2019 Toyota Avanza, is its brand-new LED headlights. While there are cars that have LED headlights, they’re usually only used for the low-beams. However, the 2019 Avanza’s use LED elements for both high and low beams. This also ensures maximum visibility and of course, looks cool and modern, too.

Reliability is one of the most vital factors to consider when buying a new car, and this is where the 2019 Toyota Avanza shines. Toyota vehicles have long had a legendary reputation for their reliability, something the new Avanza inherits by default. It bears all the classic hallmarks of a reliable, long-lasting and dependable mode of transport - a car that you can trust to be by your side for years to come, without fears of breaking down or falling apart. It’s this forte that fetches even older Toyotas a premium on the used-car market, and precisely why most people won’t even bat an eyelid when walking into the showroom to buy the 2019 Toyota Avanza.