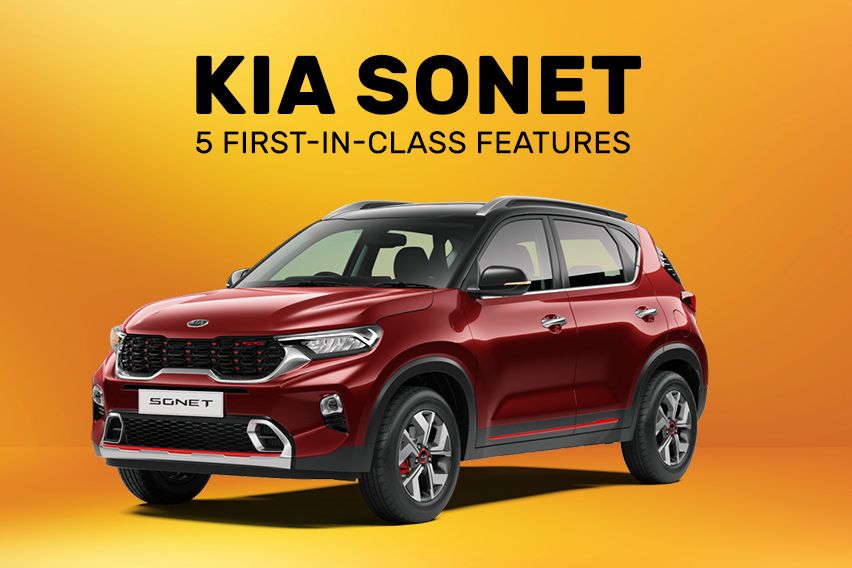 Kia Sonet, an SUV that sits under 4-metres in length, made its global debut last week and wooed everyone with its fabulous looks. Dubbed as Smart Urban Compact SUV, Sonet shares the platform with its sister brand Hyundai’s Venue and comes with varied powertrain options, including petrol and diesel engines along with manual, automatic, and a clutchless manual gearbox (or iMT) options.

Kia has also packed its latest offering with an array of features, some of which are first-in-class. Here we bring the five stand out features of Kia Sonet, have a look.

Clearly, one can find touchscreen infotainment systems in all the cars in the segment. But the all-new Kia Sonet bell the cat with the size of the touchscreen it offers. The compact SUV incorporates a large 10.25-inch system, which is undoubtedly the largest in the class as the rivals offer an 8-inch unit.

Borrowed from Kia Seltos, the system comes with Kia’s UVO connected car tech, Android Auto, and Apple CarPlay compatibility. It improves the convenience and safety in the car and, at the same time, adds to the interior style and elegance. The sound of the system is routed through a crisp Bose system, that is our next highlighted feature.

Kia Sonet is fitted with a segment-first Bose sourced music system paired with mood lighting. Basically, it is ambient lighting, but it changes colour according to the song and its beats. Though some might like this splash lighting, others may find it flashy. For this, the customers can also choose from some pre-tuned themes or can set their own colour choices to uplift the cabin ambience. Seven speakers and a subwoofer accompany the music system.

This feature comes as a big surprise from the Korean automaker. The all-new Kia Sonet houses ventilated seats for both driver and front passenger. This premium feature cannot even easily be found in the cars tagging double of its price. Such seats carry perforations in the upholstery and flow air from one or more fans to lighten the insulating effects against your back, which in turn, cools you down. It is really a much-needed feature in hot countries.

The new Kia Sonet also comes with some exciting drive modes which Tata Nexon also offers, but here, first-in-class is “Traction Modes.” The automaker brings on board three traction modes - Snow, Mud, and Sand, which change the traction control and throttle settings to help drivers on various tarmacs. The said modes will be available in automatic Sonet only, and the further details of these are expected to come near the launch. One thing needs to be noted here; Kia Sonet is not a proper 4X4 off-roader.

On the mechanical front, Kia offers the Sonet in three engine options - 1.2-litre petrol unit, 1.5-litre diesel unit, and a 1.0-litre turbo-petrol unit. Unlike its diesel rivals which offer only an AMT transmission in the diesel trim, Sonet will come with a diesel-automatic variant coupled with a segment-first 6-speed torque converter automatic transmission. It not only promises a smoother driving experience, but it is much more responsive and refined than the AMT.

Indeed, the automaker has not left any stone unturned to make its upcoming SUV a big hit. Kia Sonet price is still under the hat, but we expect a competitive price sticker and a tight battle ahead. The model is expected to launch soon in the Indian market where it will fight against the likes of Tata Nexon, Hyundai Venue, and soon to be launched Toyota Urban Cruiser and Nissan Magnite. After launching Kia Sonet in India, the Korean automaker plans to move towards other ASEAN countries, with that said, we hope this happening compact SUV soon makes its way to the local market.