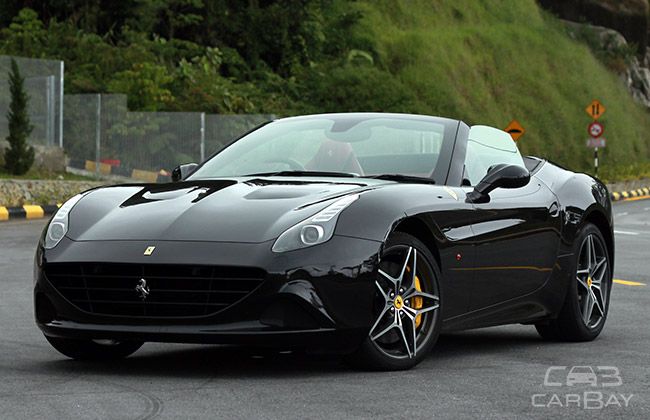 When a manufacturer decides to go back and reutilize technology from a previous era, it usually results from some critical factors. It also takes courage and determination to execute such decisions. For example, it could mean going back to a single-clutch torque converter due to reliability issues that sometimes plague more advanced dual-clutch automatic gearboxes. Sometimes, it could even be reverting to forced-induction engines when naturally-aspirated ones perform gloriously and would do just fine.

Speaking of the latter, the move to turbocharge smaller engines to produce more power while improving fuel economy is a common trend these days. Case in point, the Ferrari California T. You see, Ferrari has not been using turbochargers since they discontinued the legendary F40 in 1992. This time around, the return of forced induction has been done with slightly different goals in mind, as opposed to the wild and edgy F40.

Compared to the previous non-turbocharged version, the California T’s turbocharged powerplant has been designed to be green (by Ferrari’s standard), efficient and smooth. What’s more, Ferrari has now downsized the engine from 4.3-litre to 3.9-litre.

Yes, beauty is in the eye of the beholder. But personally, the previous Ferrari California was never pleasing to the eye. The slight hump over the rear shoulder accomodate the folding hard top, to the triangle-shaped front intakes and the vertically-arranged exhaust outlets on each side made the car look awkward.

Other drop-top Ferraris like the F430 Spyder and even California’s rivals like the Mercedes-Benz SL-Class and Aston Martin V12 Vantage Roadster have better proportions as a roadster.

Ferrari designers, however, have invested a considerable amount of time to revise the California’s styling. There is a lot to like in the new car. The turbocharged California T still features the previous car’s overall silhouette, but it receives design details that help deliver a more dynamic presence. The headlights are like a mixture of those from the 458 and the F12 while the rear of the roadster does not appear as high as before and is decorated by a bolder, more pronounced F1-style diffuser. As for the quad exhaust pipes, the California T employs a more conventional arrangement typical to most Ferraris.

The cockpit of the California T is grand and plush enough that you could live with it on daily basis while being supportive and focused at the same time. This particular California T is equipped with black-maroon contrast leather on the seats and dashboard. To me, this interior finish is well-suited to the black exterior of our test car. If you aske me, the beige leather will suit better with the Rosso Corsa red shade. . Of course, you can tailor the California T to your needs under Ferrari’s customization programme in Naza Italia where they can build your car from a host of options for the interior, exterior, wheels and even brake rotors and calipers. Ferrari logo on the headrests? Carbon-fibre wheel hub cover? Yellow seatbelts? You name it and they’ve got it.

Since the California T is a hard top convertible, it comes with a complex (and heavy) mechanism to open and close its roof. The aluminium retractable hard top works in just 14 seconds turning a sporty coupe into a seductive roadster. Apart from the weight drawback, the hard top can only be operated at speed below 5 km/h, compared to soft tops that can be operated at speeds of up to 50 to 60 km/h.

The centrally-mounted tachometer does not come with yellow background (too bad), but the letterings on the white background can still be seen clearly. On the left of the tachometer, there’s multifunction LCD that displays numerous information such as oil temperature, turbo boost, tyre pressure and driving modes. The flat-bottomed F1-style steering wheel on this particular car is all black with a carbon-fibre central hub that houses important driving control buttons. The leather gets a contrast white stitching too. On top of the steering wheel, there are red LEDs that light up sequentially as you approach the redline.

The seating position in the California T is exemplary. How could one find fault with the seating in a car made by a 16-time F1 Constructor’s Champion? Oh, since the California T is a long-bonnet, front-engined grand tourer, the car gets perfect pedals and footrest positioning too, unlike some mid-ships that tend to awkwardly offset the pedals from the centre.

Compared to the two-seater Mercedes SL and the Aston Martin V12 Vantage Roadster, the California T has the added advantage of getting your spouse’s approval as the 2+2 configuration means the roadster can ferry two children comfortably. If that’s not enough, tell her that the rear seats get ISOFIX child seat mounts too.

The powerplant is the biggest card here. Mounted between the front axle and the cockpit is an engine that is now turbocharged, but is designed to replicate the characteristics of a naturally-aspirated one; instant throttle response, high-revving and an exhilarating soundtrack. On top of that, the new V8, according to Ferrari, is now less thirsty and delivers a higher but more constant torque curve. This translates to improved drivability on the road.

Just tapping the throttle from idle makes the engine roars with and fills the exhaust with symphonic, mechanical sounds. The signs of turbocharging is very subtle, I must say. The unmistakable Ferrari scream on the upper half of the rev range is still present, but now it’s beautifully-muffled that you can still sense the richness of the soundtrack.

On the move, the California T feels much more eager and alive at any speed. I know it’s good to rev the nuts off a high-revving naturally-aspirated engine to extract its peak power, but given that you can have the same (or more) thrust from a cleaner, more efficient engine , then why not? The engine response of the California T is spot on. The car reacts sprightly to the angle of your right foot. Zero to 100 km/h can be done in 3.6 seconds and the top speed is a a hair-raising 316 km/h.

No need to pull that left paddle, simply squeeze the throttle and the car effortlessly reels you forward, even from 2200 rpm. Ferrari has achieved this by employing twin-scroll turbocharger technology and a compact turbine feature thus allowing for low moment of inertia. The turbocharged V8 engine also gets Variable Boost Management that alters boost delivery to suit both the revs and gears engaged. This means that instead of having maximum torque at your disposal in any gear, the VBM manages the torque figure according to the gear and only ‘allows’ all 755 Nm at 7th gear.

Gearshifts through the F1 dual-clutch transmission are quick, smooth and precise. It upshifts swiftly if you pull the ‘+’ paddle at low revs. Even while flooring the right pedal, the gearbox upshifts pretty aggressively and let the the exhausts pop. It also crackles after almost every downshift. Engaging, literally.

Driving the California T is surprisingly easy. The (electronic) parking brake automatically releases when you give the throttle some pressure after engaging Drive. The car can pretty much behave like a normal commuter in traffic, apart from the engine sound during idle that constantly begs you to rev it.

Drive it hard enough, and the California T will display its chassis character. There is a noticeable amount of dive and lean while braking and turning into a corner, although Ferrari claims that the car’s springs are 11% stiffer than its predecessor’s. Also, when tackling a long fast corner with slight undulations, you’d initially think that the car’s stability will be be bothered. But as it turns out, the California T works its magic and the forces exerted on the suspension, tyres and chassis are translated to sublime steering feedback and lateral Gs.

The task to effectively transfer all pulling power to the tarmac is carried out by Ferrari’s F1-Trac traction control system. The system developed from years of Grand Prix races is governed by the company’s upgraded ESP 8.0. To put it in numbers, the California T accelerates around 8.5% faster out of corners.

The Manettino switch on the steering has two driving modes to choose from; Comfort and Sport which alter the California T’s throttle response, Magnaride damping rate (stiffness) and electronic driving aids. Sport mode makes the car more livelier and focused, but it is never unbearable and nowhere near tiresome as you’d think. There’s also ESC OFF which – as the name suggests – turns everything off. This mode is made for Fernando Alonso when he sets the car’s lap time in Ferrari’s Maranello circuit.

Generally, the roadster feels neutral through the corners, mainly due to the ideal balance of front-mid-engined and rear-wheel drive configuration. But the limit of the car – from the Pirelli P Zero rubbers - is so high that it requires a safe, closed environment to reach it. The roadster is also able to carry its mass in such a high pace both on the straights and corners.

The Ferrari Califonia T elevates the brand’s entry level sports car by becoming more accessible, efficient and easier to approach while still displaying true Ferrari ethos. It also showcases Ferrari’s capability and direction in modern turbocharging after not employing it for more than a decade. With the kind of performance and drivability, I think it’s safe to say that the return of forced-induction to Ferrari engines is a celebration and can still be appreciated by enthusiasts.

Specifications of the Ferrari California T