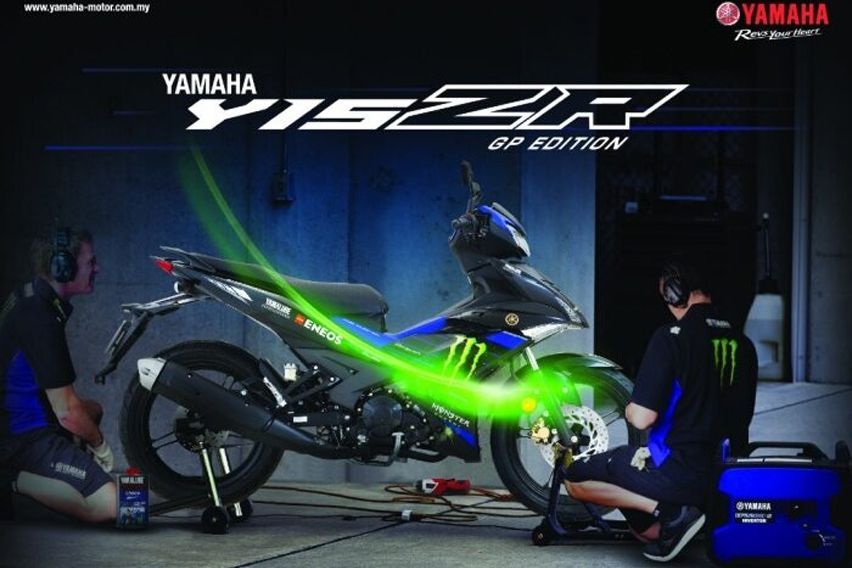 Since its launch in 2015, Yamaha Y15ZR continues to win the hearts of many with its sporty style and underbone structure. Last year in June, the Hong Leong Yamaha Motor (HLYM) has come up with its second-generation V2, dubbed as ‘King of Streets,’ which has a lot of updates over the older V1 generation. A few months ago, Yamaha Y15ZR V3 leaked images were also appeared on the internet; although, their authenticity has not yet been confirmed.

Considering the popularity of sports moped bike, Yamaha has released its several editions models over the years, including Ultraman Limited Edition, Doxou, and MotoGP. And recently, the automaker unveiled the 2020 Yamaha Y15ZR GP Edition, It pays homage to Monster Energy Yamaha MotoGP Team and decked in the same livery worn by Valentino Rossi and Maverick Vinales for the 2020 season.

Here we bring the first impression of the 2020 Yamaha Y15ZR GP Edition so that you become much aware of exactly what it is all about.

Featuring bodywork and graphics inspired by the MotoGP team, the Limited Edition model is sleeker than before. It features the splashing green and black monster energy color shades. The matte finishing looks appealing and gives out youthful vibes. We especially like the Monster logo on the side fairing.

Other than these, the styling appointments of the model remain unchanged. It houses the LED headlight that looks pretty cool and matches the sporty and aggressive styling of the moped. The indicators are placed in a DRL-style within the main body section.

The headlight unit is teamed up with a fully digital LCD instrument console, displaying a plethora of information with the white fonts on a blue background. It includes speed, gear position indicator, fuel level, tachometer, time, and much more.

Like standard Y15ZR, GP edition also houses a 150-cc, single-cylinder SOHC mill, which gets liquid cooling for superior performance on long rides. The engine is capable of generating 15.4 PS of maximum power at 8,500 rpm while kicking out a peak torque of 13.8 Nm at just 7,000 rpm. It is paired with a 5-speed constant mesh transmission.

The 2020 Y15ZR GP Edition is fitted with telescopic forks and a monoshock for suspension. The bike comes with a single-cylinder motor that can easily transfer a noticeable amount of vibration on the handle, seat, and footpegs. It is well-built and delivers good performance.

For braking, the 2020 Yamaha Y15ZR GP is also equipped with a single hydraulic disc at both ends. It also features a broader front tyre that provides a larger surface area in contact with the ground, thus enhancing the gripping strength and improving the bike's braking performance.

The 2020 Yamaha Y15ZR GP Edition price starts at RM 8,868 (excluding road tax, insurance, and registration), which is 700 bucks costly than the regular model. The limited production run model is expected to arrive at Yamaha dealer showrooms from this month.

With the purchase of Yamaha Y15ZR GP Edition, the customers will get an exclusive certificate of ownership and a Y15ZR collector’s smartwatch set.

If you are among the Yamaha MotoGP race team fans, be one step ahead than others to grab the one before it’s gone.