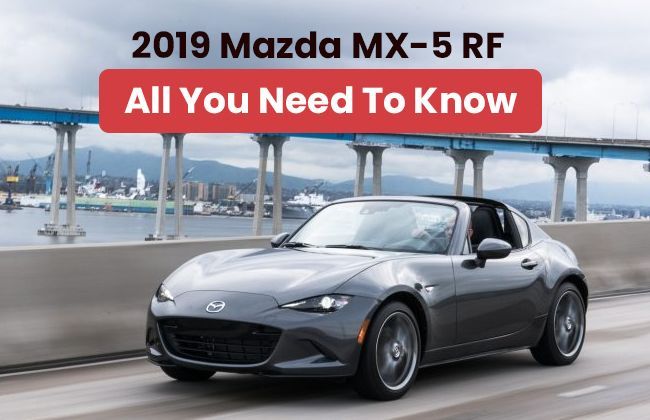 Spanning over four successful generations and thirty years, the Mazda MX-5 is arguably the world’s most famous and best-selling two-seater sports car ever made. With well over a million units sold till date, the MX-5 officially entered the Guinness Book of World Records back in the year 2000. Ever since it was first introduced back in 1989,

the Mazda MX-5 has been built upon the Japanese marque’s capable yet reliable N platform, with each new iteration featuring a thoroughly overhauled and revised version of the exact same basic underpinnings. Over the next many years, the MX-5, for the most part, remained pretty much unchanged when it came to its mission and hard-to-falter objective -- being a no-nonsense, true-to-heart sports car - attributes that haven’t changed even today.

The latest, fourth-generation MX-5 made its debut in 2014, while the most recent facelift took place for the car’s 2019MY. In Malaysia, the 2019 Mazda MX-5 RF doesn’t have too many competitors, though the Subaru BRZ and the Lotus Elise aren’t too far off, and it’s now only available as a convertible hard-top. While the pre-facelift model was a great sports car, the newer model boasts a few updates that make it even better.

Though that update hasn’t come cheap, and there are still a few omissions for the Malaysian-spec MX-5 RF compared to its global, better-equipped avatar. Prices for the latest MX-5 RF start from RM 259,154 and RM 260,354 for the manual and automatic variants, respectively. Anyway, let’s find out what’s what with this latest MX-5; and for those of you wondering what the “RF” stands for - it’s Retractable Fastback.

The 2019 Mazda MX-5 RF is a smart-looking sports convertible - embodying sleek lines, bold contours and a decidedly purposeful stance. As expected, the new MX-5 also comes in a petite package, measuring 3,915mm in length, 1,735mm in width and just 1,236mm in overall height.

Its wheelbase is 2,310mm, kerb weight is just shy of 1.1 tonnes, and its tiny boot can only hold up to 127 litres worth of items. Of course, none of that really matters -- the MX-5 RF is quite adept at drawing in gazes almost anywhere it goes. The tapering front end of the 2019 MX-5 gets a heavily-sculpted bonnet, small yet sleek projector headlamps, and a stylish bumper with an integrated grille, side-mounted air intakes, fog lights and dual front splitters.

The most peculiar aspects along the sides of the new MX-5 RF come in the form of 17-inch 8-spoke alloy wheels, massively flared wheel arches, sharply raked C-pillars and short overhangs. The back features an independent boot, chic LED tail lamps and a chiselled bumper that incorporates the deep-set rear fog lights and twin exhaust pipes. With its roof up, the new MX-5 RF looks just as iconic and playful as its soft-top sibling.

On the inside, there’s little change to tell the 2019 Mazda MX-5 RF from its pre-facelift incarnation. So that means that this cockpit still maintains its driver-oriented, sporty layout with the three-meter instrument cluster, meaty steering wheel, stepped dashboard with stitched leatherette effect, three stylish circular climate vents (except one), sporty semi-bucket leather seats, body-coloured trim on the doors and there’s even some faux carbon-fibre trim near the power-window switches.

Build quality and the general fir-and-finish feel great, and there are practically zero ergonomic glitches in this cabin. Moreover, Mazda has increased the amount of sound-absorbing materials, too, so the new MX-5 feels way quieter and more comfortable than its precursors.

And while this interior may not feel palatial (because it isn’t), there’s still sufficient room to seat two (average-sized) adults in relative ease & comfort. Meanwhile, those missing the manually-operated roof can rest assured knowing that the electrically-operated roof in this new MX-5 can be either completely raised or lowered in only 13 seconds -- that’s quite fast.

One of the most important factors behind the 2019 Mazda MX-5 RF’s charms lies under the bonnet. The 2.0-litre naturally-aspirated four-popper SkyActiv-G engine has now been massaged to produce 181hp at 7,000 rpm and 205Nm of peak torque at 4,000 rpm. These figures represent a bump of 23hp and 5Nm over the previous model, which may not sound like much, but it’s still appreciable. However, this bundle of joy is still a rear-wheel-drive platform and can be optioned with either a 6-speed manual or automatic transmission. Top speed is now in the region of around 200 kmph, whilst the acceleration time from 0 to 100 kmph has dropped to around 8 seconds (with the auto ‘box).