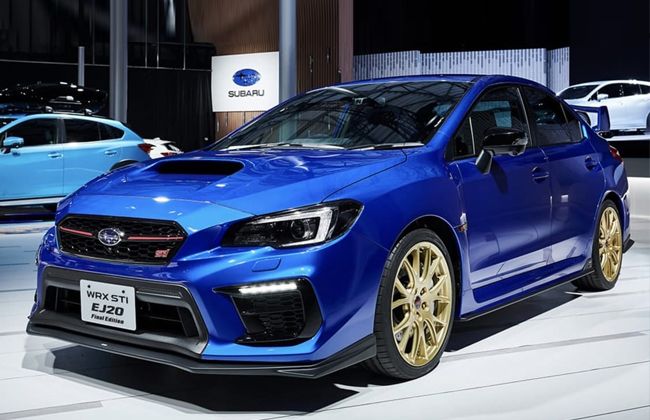 KUALA LUMPUR: The Final Edition of WRX STI EJ20 has been displayed at this year’s ongoing Tokyo Motor Show. The car looks phenomenal thanks to its gold-painted 19-inch forged aluminium wheels. The Subaru fanboys must be pretty familiar with the EJ20 because of the 2.0-litre turbocharged boxer-four mill, which has been a vital part of the carmaker’s history. While the production of the race-ready engine is set to make its debut by the end of March 2020, Subaru has come up with a special edition model to celebrate 30 years of the legendary boxer unit.

At first glance, you can spot the Japanese carmaker’s engagement in the World Rally Championship because the car comes equipped with a set of BBS gold-painted19-inch aluminium wheels and is limited to only 555 units, which signifies the partnership between State Express 555 and Subaru World Rally Team. Other equipment include side garnishing with an STI emblem, Brembo brakes, and red accents present on the rear and front bumpers.

Getting inside the car, you can find a suede-wrapped steering wheel, an STI engine start button, a set of sports seats, and matte carbon trim. You can also consider paying 330,000 yen (RM12,674) to get the “Full Package,” which includes an Advanced Safety Package and a set of Recaros.

Under the hood, there’s an “EJ20 Final Edition” badging along with the EJ20 powertrain, which is capable enough to churn out a maximum power of 308 PS at 6,400 rpm and a peak torque of 422 Nm at 4,400 rpm. The power is sent to all four wheels through the carmaker’s Symmetrical All-Wheel Drive system. The transmission duties are performed by a six-speed manual gearbox, which is further assisted with a flywheel and upgraded clutch.

There will be a lottery system through which the final edition will be sold in Japan, and the lucky ones will be able to purchase the vehicle by paying 4.521 million yen (RM173,648) for the base model.