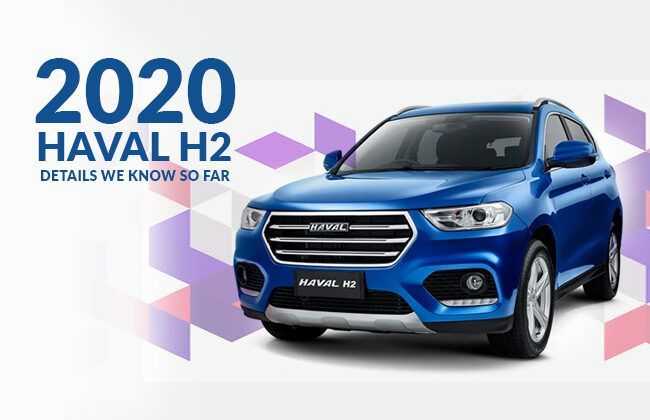 The Chinese auto giant Haval is ready with its facelifted H2 SUV, first launched in 2016. An image of the production-ready 2020 Haval H2 was recently posted on the company’s official Facebook page, hinting at the upcoming launch.

Speaking of changes, the updated Haval H2 will get some prominent styling tweaks on the outside, and a host of new equipment. The model was initially available in three variants, however, it was later reduced to two grades in 2017 as CKD units.

Haval will continue offering two variants with a single turbocharged unit and an automatic transmission. Positioned as a medium-sized crossover in the Malaysian market, Haval H2 will soon be launched in India as a Hyundai Creta and Kia Seltos rival. While the official launch is still a few days away, the Haval H2 price list and other details have been flooded on the inter-web, revealing concrete information about the upcoming model. Here is a quick look at everything we know so far about the facelifted Haval 2 SUV, read on to know more.

The mid-size crossover has a large, aggressive stance. At the face, there is a multi-slat chrome grille which flanks redesigned swooping headlamps. Unlike the pre-update version, the fog lamps and daytime running lamps are no longer separated, as both are now placed on the corner inlets of the reworked bumper. The talking point at the side is the large 18-inch alloy wheels.

Moving to the back, it gets new tail-lamp graphics and a large blacked-out part featuring reflectors. Also, there is a diffuser-style element accompanied by larger exhaust units. The entire line-up will be available with a choice of four shades including Crystal Black, Hamilton White, Mars Red, and Cocoa Brown.

The insides of the new H2 mid-size SUV will pack an array of comfort and connectivity features such as a six-way electrically adjustable driver’s seat and a new head unit compatible with Apple CarPlay. A 12-inch touchscreen Android-based infotainment system with media functions, which also doubles as a climate control system can be optioned for RM 3,139.50 on all variants.

While the facelifted H2 continues to source power from the same turbocharged unit, the power figures have reduced by 6 hp to 141 hp, and there has been a drop in torque by 8 Nm to 202 Nm. The rest has been carried over from the previous version, such as the six-speed automatic gearbox that channels power to the front wheels.

The new Haval H2 will inherit most of the safety features from its previous version, along with some new bits. With safety being given more prominence over the years, it has emerged as one of the strongest factors driving a vehicle’s sales. In tandem with the changing trend, Havel has packed H2 to the gill with a bunch of active and passive safety tech such as tyre pressure monitoring system, traction control, reverse camera, and electronic stability control. A bunch of six airbags bolster the occupants well and ensure maximum protection from injury during a collision.

Akin to the pre-facelift version, the 2020 Haval H2 will be available in just two variants-Comfort & Premium. While there is still time before the latest iteration of H2 comes out on Malaysian roads, the 2020 Haval H2 price list has already been revealed, which has gone viral on the inter-web. The locally assembled SUV gets more affordable in comparison to the previous model.


The Chinese model has been available here since 2016, followed by an update in 2017 and the upcoming one which is highly awaited. In comparison, the 2020 version carries over most of the styling elements, and equipment list from the pre-update model, save for a few new additions. However, the locally assembled mid-sized SUV is now slightly more affordable and boasts a more aggressive stance.

Haval H2 2020 Alert me when launched
Next