Honda BR-V: Which variant to buy? 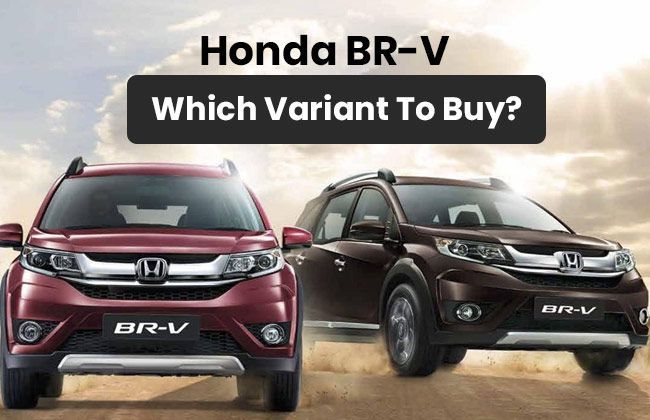 The Honda BR-V went on sale in Malaysia in early 2017, and soon became one of the best-selling cars for the Japanese auto giant. The ‘Bold Runabout Vehicle’ (or BR-V for short) is designed as a compact crossover SUV, and as such, shares its underpinnings with the smaller Brio hatchback and larger Mobilio MPV. Honda is by far the most popular car brand in the country, after the two local marques, of course. And the BR-V is their attempt at taking a crack at the bustling compact crossover segment.

The Honda BR-V’s closest competitors are the Toyota Rush, Perodua Aruz, and even the Proton Exora to some extent. Among these, the Exora is undeniably the most affordable option, though its van-like design may not appeal to everyone. On the other hand, the Rush and Aruz offer the same package but widely different price brackets. Meanwhile, the BR-V costs between RM 80,989 and RM 87,701 for the base 1.5L E and top 1.5L V trims, respectively. So, let’s figure out what you get for your money and which one of the two variants of the BR-V should you go for.

The Honda BR-V stands at 4,456mm in length, 1,735mm in width, and 1,666mm in overall height. To make room for three rows of seats, engineers have stretched the wheelbase to 2,662mm. With all seven seats in place, the BR-V can still hold up to 223 litres worth of luggage - 10 litres more than the Aruz. It’s also longer and wider than its rival, and because it isn’t too tall, passengers will find getting in and out of the Honda far easier a task. However, just like the Aruz, the BR-V also comes equipped with independent MacPherson struts at the front, with semi-independent twist beam setup at the rear.

Under the bonnet is a 1.5-litre four-cylinder i-VTEC motor that also uses electronic fuel injection. The naturally-aspirated engine produces 118 hp and 145 Nm of torque, both being delivered at a high 6,600 rpm. A continuously variable transmission (CVT) handles the delivery of power from the engine to the front wheels. Tipping the scales at just under 1.2 tonnes, the Honda BR-V is not only lighter than the Perodua Aruz but its high-revving engine is also more powerful. So, if you smash the accelerator in the BR-V, it can make it past 100 kmph in around 12.5 seconds.

Meanwhile, given a long enough stretch of open tarmac, the BR-V can clock a top speed somewhere in the neighbourhood of 175 kmph. However, Honda has tuned this engine and gearbox for maximum fuel efficiency, something that becomes apparent the more you drive it. Driven sedately, the BR-V can return up to 15 kmpl on a combined cycle.

The exterior styling of the Honda BR-V is not too different from its Mobilio sibling, though it sure looks less like an MPV and more like a crossover. To help portray its SUV ambitions better, the carmaker has jacked up the BR-V, so it now boasts slightly more than 200 mm of ground clearance, and they’ve also fitted it with faux skid plates, black protective body cladding, and large roof rails. The interior is well built and is free of any rattles or squeaks. The materials chosen are, for the most part, pretty good, though you’ll find some cheap plastics as well. The seats are comfortable and they’re supportive enough. Even the third row is quite accessible for short adults, though they’re good only for short journeys.

The most sensible variant

Both variants of the Honda BR-V come standard with halogen headlamps with daytime-running LEDs, air conditioning with rear vents and blower control, 11 cup holders, and a four-speaker audio system with support for Bluetooth, AUX, USB, and hands-free telephony. As for its safety features, the Honda BR-V holds a 5-star safety rating from ASEAN NCAP, and even the base variant comes equipped with dual airbags, ABS with EBD, Hill Start Assist (HSA), Vehicle Stability Assist (VSA), rear parking sensors, and ISOFIX child-seat anchor points.

There’s little surprise why the Honda BR-V sells so many units in Malaysia - it’s cheaper than the equivalent Toyota offering, is built well, exceedingly reliable, offers decent levels of kit, looks alright, isn’t too sluggish and has an accommodating cabin.