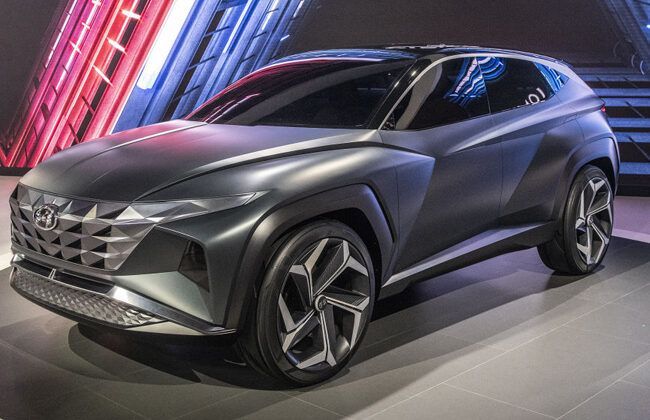 KUALA LUMPUR: The famous South Korean multinational automotive manufacturer, Hyundai has pulled the covers off a futuristic SUV concept, namely Vision T concept at the 2019 Los Angeles Auto Show. Apart from this, Hyundai has also showcased the next-gen Tucson SUV, which will be unveiled at later next year.

Vision T concept is based on the Sensuous Sportiness design language, which was first seen on the Le Fil Rouge concept last year. The design also appeared on the Sonata and Grandeur. As seen on the spy shots of the Tucson development prototypes, there are many design elements that match with the Vision T concept.

Despite being a concept, the carmaker has already revealed the dimensions, which also confirms that it is actually a production preview. The Vision T concept has a length of 4,610 mm, the height of it is 1,705 mm and width is 2,025 mm. Comparing with the ongoing Vision T variant, the car is 135 mm longer and 60 mm taller.

It has Parametric Fantasy and Transcendent Connectivity, which means the car features a riot of sharp lines and angles as each of the body’s surface is connected to the trim or lights. The entire width of the face is filled with a massive grille. There are also active grille shutters that help to improve aerodynamics along with controlling the airflow of the engine. On each side of the grille there are air intakes that provide an X-shaped graphic on the front fascia.

However, the carmaker has not spoken much about the technical specifications. The Hyundai Vision T concept gets a plug-in hybrid powertrain, while refilling is done with a charging port,  which is present at the rear passenger-side fender. After completing the refilling a Blue Drive script will turn on.