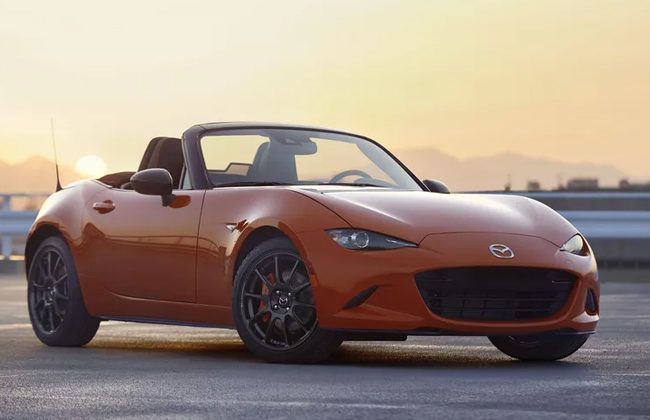 KUALA LUMPUR: The Mazda MX-5 has been quite a legendary model all around the world, and it has been 30 years since it first made its debut at the Chicago Motor Show. The company celebrated the 30th anniversary achievement of the car at the same venue by bringing the Mazda MX-5 30th Anniversary Edition. Earlier in January, Mazda teased us with a not so clear teaser image of the anniversary edition.

The 30th Anniversary Edition will have a limited run globally, and only 3,000 units will be produced. This includes both the RF as well as the convertible body forms. The special edition is given the Racing Orange color tone, along with a ‘30th Anniversary’ badging and serial number near the rear fenders. The brake calipers are done in orange color as well, where the front units are sourced from Brembo.

The cabin of the 30th Anniversary Edition Mazda MX-5 is given the same orange accents all around, including the steering wheel, dashboard, and seats. The Recaro sports seats are wrapped in Alcantara leather, which extends to the dashboard as well. The infotainment system comes standard with Apple CarPlay and Android Auto.

Under the hood, the special edition model is powered by a 2.0-litre SkyActiv engine that can churn out a maximum power of 184 PS at 7,000 rpm, along with a peak torque of 205 Nm, which comes at just 4,000 rpm. The power is delivered to the wheels via a 6-speed manual gearbox.

As quoted by Jeremy Thomson, the Managing Director of Mazda UK, the generous features, unique detailing, and the bold orange color makes for the true essence of the car.

The Mazda MX-5 has had a lot of success over the years and sold more than one million units since its inception, which makes it the top-selling 2-seater roadster in the world. The car remained faithful to its original principles of being lightweight, high fun-to-drive quotient, and affordability.