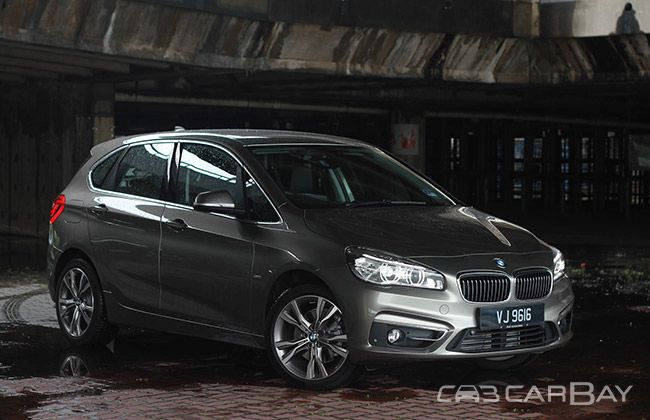 I bet most of us could still recall a time when BMW published an advert where a rabbit is pictured to have bigger front legs to demonstrate how a front wheel drive cars look like, to them. Of course, the rabbit looks awkwardly unnatural, as if it’s the front legs that do the jumping and stuff. “That’s why we don’t make front-wheel drive cars”, the caption reads.

Fast forward few years, there’s the 218i Active Tourer and 218i Gran Tourer, and we’ve got behind the wheel of the former. In Europe, the front-wheel driver is positioned to go against the Mercedes-Benz B-Class, the Volkswagen Golf SV and the Citroen C4 Picasso. Despite bemoaning enthusiasts, BMW’s ‘sweet mistake’ is crushing it there. Guess the targeted buyer in Europe does not really emphasise on a brand’s tradition.

So, we’ve sampled the BMW 218i recently, in Active Tourer flavour. It essentially a spacious five-seater MPV with plenty of technology and practical features under its sheet. The 218i may share the same branch with the 2-Series coupe under BMW lineup, but the MPV (Active Tourer and Gran Tourer) is built on the company’s UKL platform, which is also the base for BMW X1 and Mini Clubman, to name a few.

At RM218,800, the 218i Active Tourer is placed directly against the similarly-shaped Mercedes-Benz B200 Sports Tourer, but around RM70,000 more expensive than the more powerful Citroen C4 Picasso THP 165.

This particular 218i Active Tourer wears the Luxury Line option. So the RM30,000 package will get you chrome finishing on some exterior elements like the kidney grille, front air inlets, rear apron and exhaust tailpipes, and rides on 18-inch Y-spoke light alloy wheels (16-inch on Standard model). BMW’s Park Assistant, Park Distance Control and auto tailgate are also included in this package.

To me personally, I am not a fan of an MPV wearing BMW front fascia, in terms of appearance. But the overall styling is easy to the eyes and looks rather proportionate. The 218i comes standard with LED headlights with DRLs (BMW calls it LED daytime driving lights) and cornering lights. The 18-inch alloys do not appear too big to the car but paint it black and you’ll get a proper M car look.

Since this is the Luxury Line, the 218i’s cabin is upholstered in Leather Dakota with perforations topped with Fine-wood ‘Fineline’ Stream and Pearl Chrome highlights. From driver’s point of view, there’s nothing too spectacular seen from the dashboard construction, but the material selection and finishing reveal an upmarket feel from it. No complaint on the buttons and toggles feel either.

Under the hood of the 218i Active Tourer is an award-winning 1.5-litre three-cylinder engine that made its debut in the BMW’s intelligent i8. You can just imagine the 218i to be powered by i8’s drivetrain, only minus the electric motor. The three-pot mill can be characterised as smooth and efficient.

The engine accelerates effortlessly and is grunty. Max torque is delivered as early as 1,250 rpm and the twisting power can be felt especially when the car is in second or third gear at low speed. Make a sharp 90-degree turn at a junction and the car simply pulls you out of the turn with no drama. The six-speeder then upshifts swiftly through the gears, engaging the highest gear to extend your distance per litre. It is just that the car’s ‘brain’ takes some time to register your input when you apply full throttle.

However, the tree-hugging traits of the powertrain does not mean that the 218i drives rather monotonous. Push the toggle on the centre console downward to Sport mode and the car instantly feels alive. The engine note, steering, throttle response and suspension feel sharper and more direct. Switching into Sport is like transforming the 218i from a behaved kid in front of a school principle to a happy kid at a fun fair.

Want to make the car behaved again? Push the toggle upward twice to Eco Pro, and everything feels softer and lazier. Engine start/stop function cannot be disabled in this mode. Between Eco Pro and Sport mode is Normal mode, where everything is, urm normal. Not too soft, not too harsh. What I like about the driving modes is that the difference between the three selectable settings are quite peripheral, as if your passenger can tell which mode are you in even if he/she is blindfolded.

According to BMW, the fuel consumption of the 218i is rated at 5.2 liter per 100 km, which is around 19.2 km per liter. When I sample the car, I easily get 16 km per liter, so it can be said that BMW’s claimed figure is relatively achievable as 70 percent of my drive consists of moderate stop and go traffic.

The 218i Active Tourer is an easy and capable MPV. There’s not much can be told from the steering, but the electric power steering is still beautifully-weighted to provide some amount of response from the car. Driver’s seating position is in contrast to BMW’s ethos of sportiness – pretty upright – but can be a good thing for what the car is. In addition, the seats height arrives just nice when you get in the car; no need to climb or bow down like you do when getting into a sports car.

On corners, 218i’s body reacts controllably to steering input and is supple enough when rolling through the roads of PJ that sometimes are ‘decorated’ with potholes. Regardless of the suspension setting, the 218i proves to be a decent all-rounder in this respect.

The 218i is also equipped with ‘lights package’, where there will be lights or ambience in some areas of the car. My favourite one would be the reading lights for the rear passenger, beneficial during long travel at night.

If you are to find a spacious five-seater MPV and are not the one that put brand’s tradition as a major deciding factor, then the 218i Active Tourer is an MPV you should take into account. It packs spaciousness, versatility and technology into one capable vehicle. At the end of the day, a mistake can sometimes turn out to be a surprise success, isn’t it?

Specifications of the BMW 218i Luxury Line