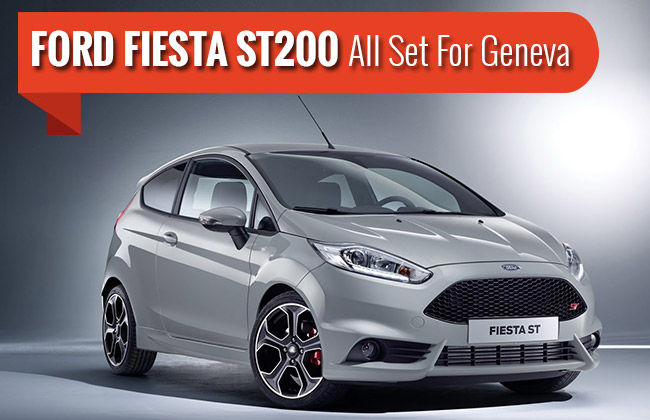 Kuala Lumpur. Ford Fiesta ST200 hatch is ready to be revealed in the Geneva Motor Show 2016 with a much sporty upgrade and is slightly different from its predecessor; the Ford Fiesta ST, in terms of power boost. The all-new Fiesta ST200 comes geared up with a 1.6-litre turbocharged engine that bangs on with an intensified power of 215 PS and delivers considerable torque of 320 Nm. The over-boosted performance of ST 200 touches a top speed of 230 kmph while reaches the maximum acceleration of 100 kmph in just 6.7 seconds, swifter than the plain ST. Fiesta ST200 comes adorned with progressive features beyond power enhancement which include; 3-mode Electronic Stability Control, Enhanced front steering knuckles, Torque Vectoring Control etc. The Ford Fiesta ST200 price is yet not revealed but soon will be updated after its release in the Geneva Motor Show 2016.

Recently the company introduced its all-new Kuga at Mobile World Congress and it seems like Ford does not want to hold on with just this as it has announced some more sensational cars that are lined-up to be displayed at the 2016 Geneva Motor Show.

The hierarchy of Ford in building artistic cars continues with the inclusion of all-new Ford GT that comes powered with ultra-high-performance along with rear-wheel drive & mid-mounted engine. In the same queue, the all-new Ford Focus RS is the next car which will make its debut in the show and will be equipped with pioneering design besides innovative engineering. Following Focus RS, Ford Focus ST is the next car which will offer a choice between two vigorous engines viz., a 2.0-litre EcoBoost and a 2.0-litre TDCi. Apart from the engine variation, it will also feature a specially tuned Torque Vectoring Control system which aids for better handling on road.

The much awaited American muscle, the new Ford Mustang is the next car in the extensive lineup of Ford which comes exclusively with a lightweight body structure and pervasive high-strength steel, proving its impressive safety traits. Last in the queue is the new Ford Fiesta ST which is fitted with a 1.6-litre EcoBoost engine, comes as the multi award winning car which is endowed with advanced suspension and braking to bestow a better driving performance. The new variants will display a great variety of control, conduct and engineering that will lead to an appealing outcome. Through the proficiency, intelligence and understanding, Ford will display its master-works along with the mission statement of “Innovation through performance”.