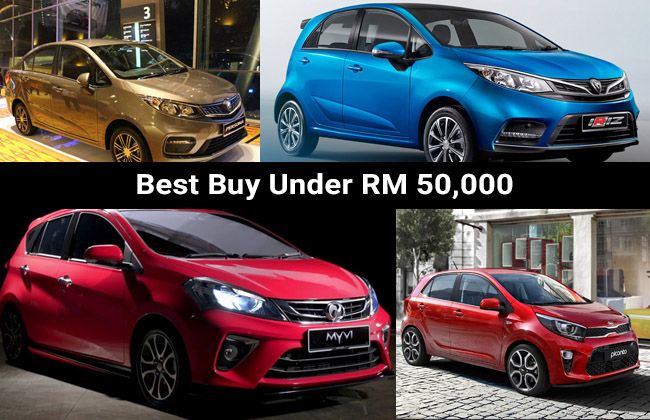 Now, if you’re in the market for a brand-new, quintessentially Malaysian and budget-friendly car, you’re in luck. This is because two of the largest and most admired automakers in the country have just the right set of options for you. Perodua and Proton both seem to have concocted and mastered the formula for developing and selling some really decent set of wheels for under RM 50,000. So, if that’s your maximum budget for your next purchase, read on and find the top choices which really warrant your attention. Also, keep in mind that each variant chosen here for these cars represents the highest you can go before surpassing the RM 50k limit.

Probably the leader when it comes to outright sales numbers, the Perodua Myvi needs no introduction. Till date, Perodua has sold well north of a million Myvis in Malaysia - a number that’s only going to climb further and further. While there are variants of the Myvi that are offered with a more powerful 1.5-litre engine, they’re also more expensive. Your best bet of the range rests with the RM 46,590 1.3L X trim with the automatic gearbox. As you can tell, this one’s powered by a 1.3-litre 4-cylinder petrol engine. In the Myvi, it produces 94 hp, 121 Nm of torque, and drives the front wheels via a 4-speed automatic gearbox. While it’s definitely no tarmac-scorcher, the spacious Perodua Myvi 1.3 also excels when it comes to fuel economy - achieving a truly remarkable 21.1 kmpl.

Coming in at just RM 46,700 is the 2019 Proton Iriz 1.6L Executive trim. Under the hood is a 1.6-litre four-banger that puts out 107 hp and 150 Nm of peak torque. While this unit comes paired to a more advanced continuously variable transmission, the Iriz isn’t as economical as the Myvi - consuming up to 13.5 kmpl. However, its larger engine does provide it with some additional pep, and as a result, the Proton Iriz is a better overall performer. Its smaller dimensions also equate to better manoeuvrability in heavy city traffic and ease of parking in really tight spaces.

The Executive variant of the Proton Iriz sports features such as keyless-entry & go, automatic headlamps with LED DRL, rear spoiler, and a 7-inch touch-multimedia head unit with Bluetooth and smartphone connectivity. And even though it has only two airbags, its five-star crash safety rating means that you still get ABS with EBD and brake assist, electronic stability and traction programmes, hill-hold assist, all-around parking sensors, and a rear-view camera.

While the above two cars are good hatchbacks, the Perodua Bezza top-of-the-range 1.3 Advance packs even more punch at only RM 47,790. For starters, it comes with sporty side sills, smart-key entry with push-button start, leather-trimmed seats and multifunction steering wheel, power-folding wing mirrors, auto engine stop-start, and a touch-infotainment display with in-built navigation and ‘Smart Link’ connectivity option. The Bezza also benefits from a voluminous 508-litre boot capacity and a stellar 21.3 kmpl fuel-economy figure. The latter is the result of the Bezza’s 1.3-litre four-popper motor, which employs a stop-start system, and is good for 94 hp and 121 Nm of pulling force. Meanwhile, its safety bucket also impresses with the inclusion of front & rear parking sensors with reversing camera, dual airbags, ABS with EBD and emergency braking assist, plus vehicle stability & traction control systems.

Priced at RM 49,600, the 2019 Proton Persona Executive trim is a great package for the money. Straight off the bat, the Persona enthrals with its more stylish and contemporary exterior design. It might only be a little more expensive than the Bezza, but it sure looks more premium. As for its equipment list, there are the 15-inch alloy rims, follow-me-home headlamps with LED DRL, electrically-operated & auto-closing wing mirrors, a trunk spoiler, intelligent keyless-entry with push-button ignition, part-leather seat upholstery and finally, a 7-inch touch-display with support for smartphone mirroring and Bluetooth. Using the same engine found in the Iriz, the power output and performance digits of the Persona is identical to that of its hatchback sibling. On the safety side of things, the Proton Persona offers dual airbags, anti-lock brakes, traction control, and vehicle stability management.