Top 8 most fuel-efficient cars in Malaysia 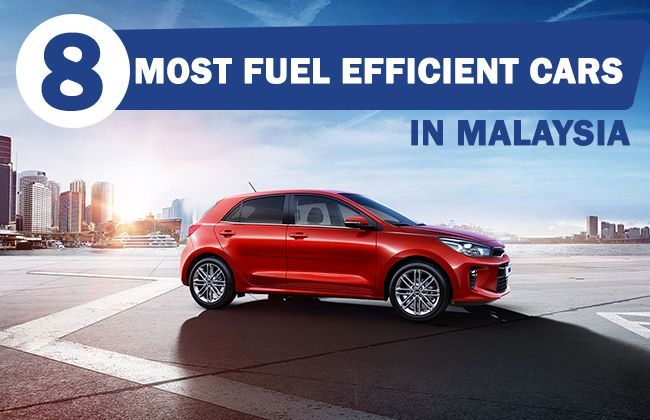 Compared with the Western though process, the ASEAN market has an entirely polarising approach towards automobiles. While the European and American markets have always focused on driving dynamics and performance over everything else, the ASEAN market has its key focus on more practical aspects like fuel efficiency and ergonomics. Out of these, the point of fuel efficiency has always been a major deciding factor for a prospective car buyer.

Following is a list of top eight most fuel-efficient cars in the Malaysian market, which thanks to their impressive quality of being misers in sipping least possible fuel while on the go, have created a remarkable reputation among the stiff market competition. Here you go:-

Perodua Bezza, the sedan with Made in Malaysia tag makes us proud and happy in endless ways. The car with its sleek and aerodynamic design has captured hearts of millions. Be it the shark fin antenna, chrome finish at the front and rear, or the retractable ORVM, Bezza exterior seeks attention. The interior along with being exceptionally spacious comes with utility features like push start-stop button, rear USB port, luggage net and more. Perodua Bezza spec sheet includes a 1.0-litre VVT-i engine that is turned to generate 68 PS of power and 91 Nm of torque. Fuel consumption with the Eco-driving mode on is around 22.8 kmpl in the manual variant.

Next on our list is a hatchback from Perodua, mind you unlike the other boring options in the segment, this one looks quite smart. Also, the Myvi price tag of RM 42,790 makes it an affordable option compared to the features on offer. Doing justice to its peppy exterior profile, Myvi interior is modern both in looks and amenities list. Included in Perodua Myvi specification list are leather-wrapped steering with controls, digital air-con controller, multimedia system with smart link, push start-stop button, adjustable steering wheel, headlamp levelling system, and reverse camera to name a few. The safety front is guarded pretty well by Perodua’s new Advanced Safety Assist.

Powering the Perodua Myvi is a 1.3-litre Dual VVT-i engine that satisfies EEV standards by complying to the EURO 4 regulations. With the Eco Idle system on the Myvi displays a fuel economy figure of 21.2 kmpl.

The Hyundai i10 has been serving the Malaysian market for quite some time now and is considered to be an excellent first-time buying option. In addition, it comes with Hyundai’s trust and reliability. Offered in two engine options, 1.1-litre, and Kappa 1.25-litre, it is the former we have picked. This 1086 cc petrol unit makes 69 PS at 5500 rpm and 99 Nm at 4500 rpm. Contributing in the mileage figure is the Dual Continuous Variable Valve Timing System that optimises engine performance and maximises fuel consumption. Hyundai i10 specs reveal a mileage figure of 17.24 kmpl.

Hyundai i10 price starts at RM 48,388 and compared to its rivals, it offers a rather simple exterior and essential cabin feature.

Globally available in two body styles – hatchback and sedan, the former form of the Mazda 2 has been a success story for the parent company in the Malaysian market. Apart from providing the comforts and luxury of a midsize sedan, the Mazda 2 hatch comes with the company’s famed “Skyactiv” technology, which aims at enhancing fuel efficiency. And this is the reason why the Mazda 2 delivers an impressive fuel economy of 19.23 kmpl from its 108 bhp 1.5-litre four-cylinder petrol mill. No wonders than it has won the 2017 Japan’s car of the year award too.

Over the years, the Mitsubishi Mirage has been criticised for its ‘too functional’ appeal, which has restricted its desirability, even among the small car buyers. However, the current iteration has been spruced up with modern features, especially from the inside. The Mirage has always been popular for being a frugal car, for the fact that its 1.2-litre three-cylinder petrol engine is capable of delivering a fuel economy of 18.87 kmpl, making it the most fuel-efficient hatchback in the Malaysian market.

In the earlier days, all Ford cars have always put their priority on being fun to drive and performance oriented vehicles, keeping the factor of fuel efficiency in the backseat. However, the whole equation changed with the introduction of the Ecoboost family of turbocharged petrol engines, which offer the perfect amalgamation of performance and efficiency all at the same time. This is quite evident from the Fiesta 1.0 SE, as the 1.0-litre three-cylinder turbocharged petrol engine delivers a fuel economy of 18.87 kmpl, giving it an edge over all the other premium hatchbacks in the country.

When it comes to making perfect contemporary all-rounders, Kia has never failed in the job. This is evident even from its smallest offering in the Malaysian market, the entry-level Picanto hatchback. It is not only the aggressive yet functional design of the Picanto which leaves a lasting impression, but the fuel efficiency of this entry-level hatchback is also considerably impressive. The Hyundai-sourced 1.2-litre petrol engine of the Picanto delivers a fuel economy of 17.76 kmpl, which along with the quality interiors makes the Picanto a perfect package for all those who are looking for an entry-level hatchback.

The Iriz might not be a globally recognised name as the other four names in this list. However, when it comes to the Malaysian market, it is quite a hit here. With cutesy looks from outside and feature-rich cabin on the inside, the Proton Iriz is Malaysia’s answer to the brewing small car market across the globe. Powered by two petrol engine options, the 1.3-litre petrol and 1.6-litre petrol. The smaller mill of the Proton Iriz delivers an impressive fuel economy of 17.24 kmpl, the best figure in Proton’s car lineup when it comes to fuel efficiency.

These were the five most fuel-efficient cars in the Malaysian market. So, if the high fuel expense bothers you, these cars would be a bliss to check-out.