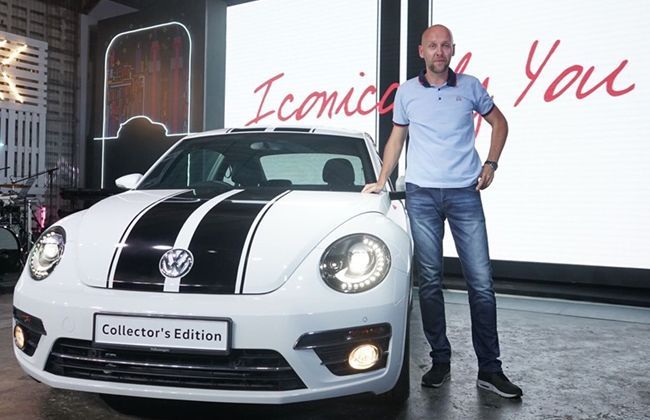 KUALA LUMPUR: It was only yesterday that we informed you about VW’s announcement to cease Beetles production line by the end of the year. While auto enthusiasts around the world are busy speculating Beetle’s possible successors, VW Malaysia has done something applaudable for the iconic car’s farewell.

Volkswagen Passenger Cars Malaysia has commemorated the occasion by introducing Beetle Collector’s Edition. This special edition Beetle is priced at RM 164,390 and is offered in four exterior tones - Tornado Red, Blue Silk, Hanabero Orange, and Pure White. The production is limited to just 75 units, and all the customers will be given an official Collector’s Edition Beetle ownership certificate.

What’s unique about the Collector’s Edition? Well, the car comes along with an extensive range of accessories worth RM 120,000.

Included in the kit are -

If this doesn’t seal the deal for you, then you should know that it is the last special edition car to be offered in the country.

Apart from the design, the car receives no other changes, even on the mechanical front. To be specific, the Collector’s Edition is powered by a 1.2-litre four-cylinder turbo TSI petrol engine. This engine churns out 103 hp at 5,000 rpm along with a peak torque of 175 Nm at 1,550 rpm and is paired to a 7-speed dual-clutch gearbox that transmits power to the front wheels.

“All good things must come to an end, and it is the same with this global bestseller. The VW Beetle has enjoyed a rich history – in Malaysia, it is one that dates to when it was assembled in Shah Alam in 1968. In fact, most Malaysians grew up with a connection to the much-loved car,” said Erik Winter, VPCM managing director.

The Collector’s Edition Beetle has been launched under VW Malaysia’s ‘Bye Bye Beetle’ campaign that'll end with The Iconic Gathering scheduled for 13th July 2019 at Putrajaya. The company is aiming to break the current largest Beetle gathering record at one place in the country.