New Honda BR-V: What is in stock? 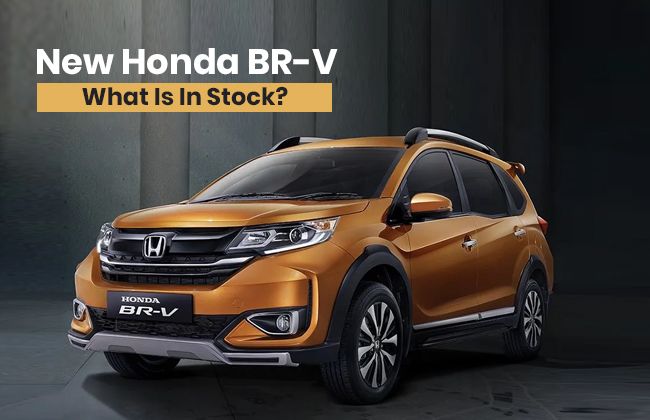 Honda is prepping to bring its seven-seater SUV, BR-V in a new avatar. Bookings for the upcoming model are open across authorized dealerships in the country, which implies the launch of new BR-V is around the corner. On the outside, it will receive styling upgrades, though proportions will remain intact. The interior will witness some refreshing tweaks for enhanced cabin experience, however a list of equipment will be carried over from the previous version and some new features are likely to be added.

As for Honda BR-V specifications, it will remain as is with the same SOHC four-cylinder engine powering the line-up. Likewise, the safety suite will also be carried over from the preceding model, though it remains to be seen if Honda adds any new features. With the above changes in the pipeline, expect the Honda BR-V price to get a mild bump, though actual figures will be revealed at the official launch. While there is still some time before Honda starts retailing the seven-seater in Malaysia, let us walk you through changes expected in the new BR-V.

At the face, there is a restyled grille which now comes with two slats and a redesigned bumper which now looks more aggressive. It also sports new fog lamps housings and garnishes. The bumper at the back has also been tweaked and now gets vertical reflectors, replacing the horizontal units. Moving to the side, it sports 16-inch alloy wheels, while the rest of the elements have been retained. Other than these changes, the rest of the styling has been carried over from the previous version. Listed below are other exterior features.

The interior of the new BR-V packs premium leather upholstery with contrasting red finishing. Since there are no dimensional changes, the cabin space remains the same with generous knee and shoulder room for the occupants. As for equipment list, it packs push-button start/stop, automatic climate control, multifunction steering wheel, rear ac vents, 50:50 split-folding third row seats, 6.1-inch touchscreen infotainment system supported by smartphone connectivity among several others. The cargo volume with the seats down is 539-litres, which squeezes to 233-litres with seats up.

Other interior features are mentioned below.

The new Honda BR-V specs sheet features a solo 1.5-litre, four-cylinder, SOHC i-VTEC engine same as the previous version. It makes a maximum power of 120 PS at 6,600 rpm along with a peak torque of 145 Nm at 4,600 rpm. This unit will be connected to Honda’s continuously variable transmission (CVT).

On the safety front, the new Honda BR-V will continue to come with prominent bits such as driver-side airbag, co-passenger airbag, anti-lock-braking system (ABS), hill-start assist, vehicle stability control, crash sensors, child safety locks, ISOFIX points, hill-start assist and reverse camera. In addition, also expect seatbelts for all three rows, electronic brakeforce distribution, sensors at both ends and security alarm with an immobilizer to be part of the pack.

The current version of the seven-seater SUV comes in two variants priced from RM 80,989, however, prices for the updated version have not been revealed yet. Honda will announce the pricing at the official launch, currently, it would be a bit premature to speak about it.

Sporting a voguish design, the Honda BR-V is built on the company’s stretched Brio underpinnings. The versatile platform has been used in several Honda models sold in various markets globally. It features a three-row layout, with room to accommodate seven occupants inside. With the new dose of updates, the SUV is expected to improve over its predecessor, though changes expected are mild and mostly cosmetic. Bookings for the new version are now open across 100 Honda dealerships in the country. As for the rest of the details, Honda will reveal it officially later at the launch.

Honda BR-V Alert me when launched