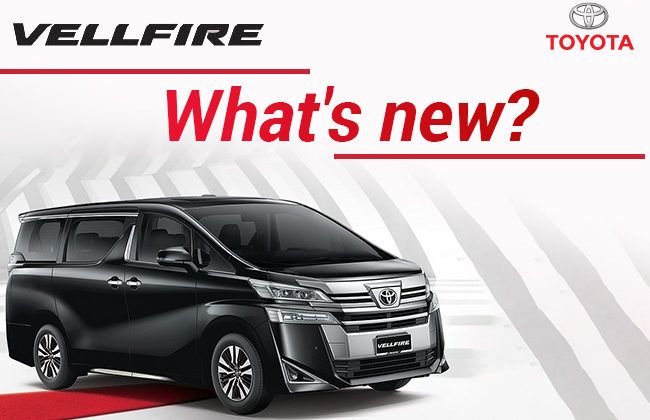 Toyota Vellfire is one of the two most luxurious MPVs that the Japanese brand has to offer in Malaysia. The other one is the Toyota Alphard. The Vellfire has been around for quite some time now and needed an upgrade. Considering this and the fact that the Vellfire is quite popular in the country, Toyota has got a new updated model for 2019.

There are a number of changes that have been made in the 2019 Vellfire to make it that much more desirable and suitable for today’s modern world. Following are a few of the new features that you’d get with the 2019 Toyota Vellfire.

The previous model of the Toyota Vellfire was already pretty aggressive from the front because of the imposing grille and sharp headlight setup. Toyota has restyled the front fascia for the 2019 model to make it even more aggressive and prominent.

The new model carries a lot of chrome at the front. It is something that you can’t miss even in the first look. The bonnet has got a wide horizontal chrome slat with the branding in the middle also done in chrome. Between this and the bumper is a reasonable sized body-colored strip to give a break from the chrome treatment.

Moving down, the bumper gets a lot of chrome as well. There are five horizontal blacked-out chrome slats on either side of the bumper. We also see a chrome surrounding. So, yes, there is a lot of chrome. As far as the headlights are concerned, they are full LED units that offer a great amount of illumination in the dark. And there are fog lamps located at the lowest portion of the bumper.

The latest Toyota Vellfire is not a car that you’d miss on the road. It has a huge road presence. There are many elements that help you easily identify the car. We already talked about the front fascia and how chrome-laden it is and you won’t move on without looking at it at least twice. The rear end of the latest Vellfire is similar when it comes to visual appeal.

The large dimensions of the Vellfire make a big impression to the people. The rear end too has got a large black windscreen with a wide horizontal chrome slat just below it. The Toyota logo is done in chrome too and sits right in the middle of the chrome slat. The contrasting black windscreen and chrome look quite nice actually.

The tail lights are also very unique. They have got a very sharp design. When not lit they appear to be white and the blacked out centre portion enhances the sporty look. And while braking, these sharp shaped tail lights glow up in a beautiful manner.

The instrument cluster on the previous model of the Vellfire was already a good setup loaded with information. Toyota didn’t alter it too much for the new model. There is a slight visual update. The dials now have red color treatment for the inside circle and even the needles have been turned to red. Although it isn’t that big of a change, it surely makes thing a bit sportier. Other than that the rest of the things remain the same. You continue to get a MID in centre of the instrument cluster that shows all sorts of information.

These were some of the prominent changes in the new Vellfire. If you look at the 2019 Vellfire specs, you’d see that Toyota has left many things untouched. Perhaps, that is a good thing because the Vellfire has been a great luxury van ever since its inception. The amount of comfort and luxury you get in this vehicle is ludicrous. The best place to be in a Vellfire is the second-row seats. They offer full captain seats with a ton of legroom and headroom and a whole bunch of controls.