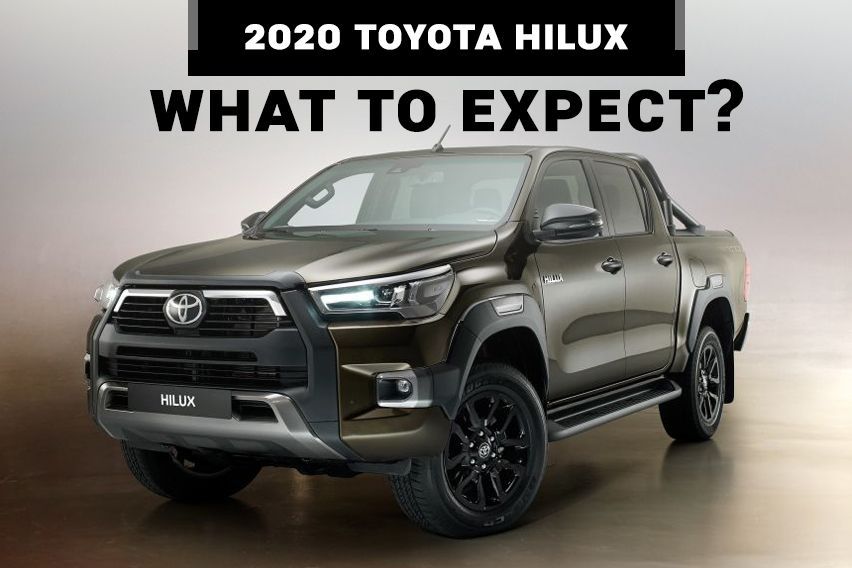 The Toyota Hilux is one of the best-selling pickups in the country, and now it is getting a fresh look for the year 2020. Toyota Malaysia has been teasing the all-new Hilux for a while now and the automaker has even opened its ordering books for the new version.

The Hilux 2020 is said to feature a revised exterior and interior apart from getting advanced safety and powerful engines. The new Hilux would be available in five trim options - one brand new and rest either same or with a few revisions. The entire price list will be once the car gets launched; however, its estimated price range lies between RM 93,880 - RM 144,880.

As mentioned above the 2020 Hilux will be available in five trims, they are

When you see it, you’ll know it’s the all-new Hilux, such are the design changes Toyota has made to the pickup. The soon to be released facelift will feature revised front bumper, hexagonal-shaped front grille, sharper headlamps, L-shaped fog lamp surrounds and LED tail lamps with hexagonal graphics. Besides, the range-topping variant of the pickup will feature new bonnet moulding and skid plate. The base trims are confirmed to run on 17-inch and 18-inch wheels.

The upcoming Hilux is expected to come along with a lot of revision. After talking about its exterior changes, it’s time to check what’s on offer on the inside. On one hand, where the base trims get new meter design with Multi-Information Display, the flagship trim will get new cabin trim design, new key cover design, addition of illuminated door trim garnish, and new meter design.

The changes are not just limited to the outside, but Toyota has revised the car internally as well, ensuring the best output. The upcoming Toyota pickup features a two-stage oil pump that can optimally switch the oil pressure. There’s also a water-cooled double-pipe type pre-EGR (exhaust gas recirculation) cooler that’ll optimise EGR gas temperature.

Apart from the base Single Cab 2.4 MT trim, all the other 2020 Hilux variants will feature a VFC (variable flow control) system for pinion steering and power-assisted rack. This will provide appropriate steering feel depending on the vehicle’s driving speed - it feels lighter at low speed and heavier at higher speeds. The VFC system places less demand on the power steering pump, resulting in better fuel efficiency.

The 2020 model comes with Auto Limited Slip Differential (LSD), this system aids traction using the TRC (traction control system) to control engine output and braking when one of the rear wheels starts to spin.

One of the most significant upgrades in the upcoming local-spec Hilux pickup is the confirmed inclusion of the Toyota Safety Sense (TSS) suite. Earlier the TSS was limited to Hilux available in other markets like Australia.

The 2020 Toyota Hilux is undeniably one of the highly anticipated cars of the year. With its new design, better performance figure and safety pack, it sure would be a success like its predecessors.