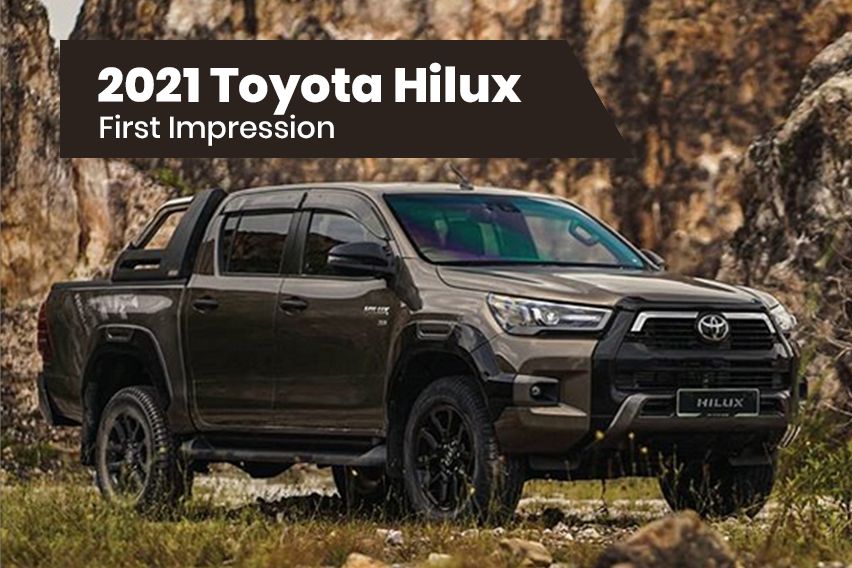 In the world of pick-up trucks, the Toyota Hilux is well known for its boldness, reliability, and utilitarian approach. The latest 2021 version of the pick-up made its official debut in Thailand earlier this year, where it is built for the ASEAN as well as Australian markets. Here, in Malaysia, we also have been waiting for the new iteration since then, but finally, the wait is over now as Toyota Malaysia launched the new Hilux today.

Available in five variants, the new pick-up features subtle exterior and interior modifications along with some significant mechanical and safety upgrades. Let’s have a look at the first impression of the 2021 Toyota Hilux.

The new Hilux incorporates a bolder appearance with a restyled front end and other stronger designing elements. The front grille is now larger and more angular and flanked by more pronounced LED headlights. The sharper eyes are coupled with L-shaped fog lamp surrounds and also there is a reshaped bumper.

The Hilux top trim, Rogue, also gets black plastic bits on the nose and over-fenders that complement its muscular look. One of the significant upgrades is the pick-up’s new tail light design, which now boasts a distinct ‘E 3’ LED signature. Talking about the wheels, the single cab trim rides on 17-inch steel rollers, while 17- and 18-inch alloys are available for higher trims.

After talking about the exterior mods, it’s time to look around the cabin. Just like the exterior, the new Toyota Hilux looks appealing inside also with such styling cues that could even beat a luxury car. The rich leather upholstery gives a plush feel, whereas the all-black dashboard looks premium and adds the style quotient. To further elevate the premium ambience of the flagship Rogue, a clear blue door trim illumination is also included.

At the same time, the higher trims get automatic air-con with rear vents, a dashcam, leather seats, and powered front seats.

Just like the predecessor, the 2021 Toyota Hilux is also available in two engine options - 2.4-litre and 2.8-litre. Reserved for the range-topping Hilux Rogue, the bigger 2.8-litre turbo diesel mill received technical improvements that resulted in higher output and torque. Compared to the outgoing version, the improved unit delivers 204 PS of maximum power and 500 Nm of torque, 27 PS, and 50 Nm more than before. Despite the higher output, fuel consumption has been reduced by 4% to an average of 10.9 kmpl.

In contrast, the power figures for the smaller engine remain unchanged, however, it also received some refinements for better cooling and fuel consumption. In this regard, the automaker claims a 5% improvement in fuel efficiency.

For the first time ever, the Malaysian market's Toyota Hilux gets the Toyota Safety Sense (TSS) advanced driver assistance suite, which includes a pre-collision system, dynamic radar cruise control, and lane departure alert with steering and brake assist. TSS is only available on the top-spec Hilux Rogue.

The other safety bits available on the top two variants are blind-spot monitor with rear cross-traffic alert, security and solar tinting, and a telematics system that enables real-time tracking using GPS signals. This system comes as optional in lower trims.

As we have mentioned above, the all-new Hilux is available in five variants, including single and double cab options. Here we have a variant-wise price list of the 2021 Toyota Hilux, have a look.

Indeed, the all-new Toyota Hilux is not only rugged and reliable as ever but it is also impressively equipped.