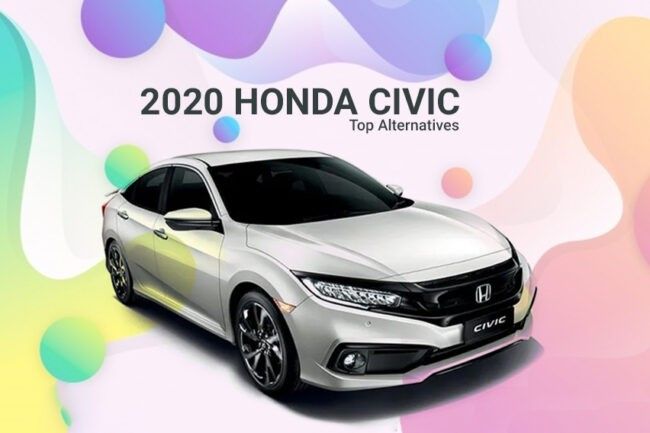 The Honda Civic is one of the most loved sedans in the brand’s fleet, and if there ever would be an award for sedan popularity, it would win it. And now, with the introduction of the all-new 2020 model, the car has only gained killer looks, feature-loaded cabin, powerful engine, and best-in-class safety features, it is indeed a complete package. The latest iteration of the Civic is the 10th-gen facelift version, and ever since its arrival, it has attracted more customers that Honda Malaysia ever imagined.

In case you are planning to buy a sedan and wondering which other car has the potential to go up against the 2020 Honda Civic? We’ll suggest you read on and find out because we have listed not one but three worthy 2020 Honda Civic alternatives, they are:

Like the Civic, Toyota also introduced the latest model of the Corolla in Malaysia a few months back. It is in its 12th-generation and was launched in the country in two variant options. This time around, Toyota had made sure Corolla has all the necessary bells and whistles to face the fierce competition in the sedan segment. In short, Toyota completely revamped the all-new Corolla.

Some of its key features of new Corolla are-


The all-new Corolla underpins the Toyota New Global Architecture GA-C platform. It features an overhauled design that might not be as sporty as the 2020 Civic, but it sure does look elegant. It gets various exterior elements that add a touch of sportiness to the sedan-like front bumper design, large blacked-out radiator grille, alloy wheels, etc.

Toyota Corolla specs list only one engine option - 1.8-litre four-cyl petrol Dual VVT-i engine that produces 139 PS of maximum power at 6400 rpm and 173 Nm of peak torque at 4000 rpm and is mated to a 7-speed Sequential Shiftmatic CVT that sends drive to the front wheels. As for the interior, the Corolla’s cabin is quite luxurious and spacious.

If the 2020 Civic is too sporty for your liking and Corolla is on the elegant side, then perhaps the Mazda 3 Sedan is the one as it falls somewhere in between. We have always liked Mazda cars, the KODO design language they flaunt is pretty unique. Mazda 3 Sedan front looks aggressive thanks to those sharp headlights. Also, the large radiator grille covers up most of the space of the front bumper and is one way to identify a Mazda at a glance.

Available in two engine options - 1.5-litre mill developing maximum power of 118 PS along with a peak torque of 153 Nm and 2.0-litre engine with 162 PS and 213 Nm of torque. Both coupled with a 6-Speed automatic with manual shift mode.

With its long list of features, Mazda 3 Sedan sits along with the 2020 Honda Civic and Toyota Corolla. However, when it comes to pricing, the Mazda sedan is the most expensive one in the lot. Mazda 3 Sedan price range goes from RM 139,620 to RM 160,059. It is available in three trim and seven colour options.

When talking about sedans, one often misses out this Proton offering Perdana, and we think it’s quite underrated as well. Yes, Perdana hasn’t received any update for a long time now, but it is still a reliable car with an excellent overall package. Its exterior design is a mix of sportiness and elegance. From the front, it appears much closer to the ground than it actually is. On to the side, its wheels and prominent character lines will win your heart. And it is available in five colour tones.

Some of Perdana’s key features are-

When it comes to under the hood configuration, the Perdana is offered with two engine options - 2.0-litre with 158 PS and 189 Nm and 2.4-litre with 178 PS and 222 Nm. Both paired to a single 5-speed automatic transmission.

Proton Perdana price starts at RM 103,927, making it an affordable option. However, it lacks various advanced features which other cars in the segment provide, such as active safety features, digital instrument console, etc. thus justifying its lower price tag.