Proton Ertiga: Is it a good buy? 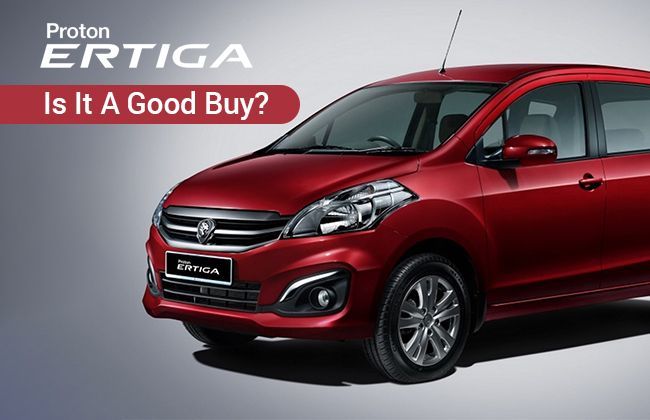 Proton has been very vocal about their tie-up with Suzuki. After all, a budding company with aspirations to eventually make it big globally will definitely keep a check of the established players. Or at least look up to them. This is what Proton is doing. It uses technology from Suzuki and now even is doing badge engineering. The first vehicle is the Ertiga. Suzuki markets it by same name. Proton hasn’t added anything new to the mix and is using the simple cut, copy and paste formula. It also helps take on competition in the form of the Perodua Alza with minimal input costs as well as development time. So, is the Proton Ertiga a good buy then? We find out.

Spoiler alert! The Suzuki Ertiga has already received a generation change in Indonesia. That one is a sea change over the current vehicle. This includes the bigger shape, bigger engine as well as more advanced features. Nonetheless, Suzuki is tight lipped about the launch of this vehicle in Malaysia and subsequently Proton too. Coming back to the current Proton Ertiga, the vehicle looks smart. It seems like an extended hatchback but well done in proportions. It is a B-segment MPV and looks and feels like one too. The 15-inch wheels fill the wheel wells very nicely. The biggest difference is in the grille, with Proton using a thicker chrome bar than Suzuki. The rear also uses a bigger chrome bar to connect the lights. The Proton Ertiga measures 4,265 mm in length, 1,695 mm in width, 1,685 mm in height and has a wheelbase of 2,740 mm. There are four colours to choose from - Carnelian Brown, Metal Grey, Cotton White and Ruby Red.

The Suzuki Ertiga had very good interior upholstery as well as build quality in its class. The same applies naturally to the Proton model too. A beige/grey theme works well for the cabin and the only thing different here is the Proton logo instead of the Suzuki unit on the steering boss. The steering wheel also hosts music and menu controls. The front seats are spacious in their own right while the second row is decent. It has got tilt function for the backrest whereas the seats can be moved aft and back. The rear seat is best for children. We feel that the Ertiga works well as a 5-seater and at a pinch, as a 7-seater. The boot space is dismal with all the seats up. However, fold the rearmost bench as well as the second row and there is lot of space.

Suzuki’s 1.4-litre K14b engine is a refined unit. The petrol engine makes 92 PS of power and 130 Nm of torque. A five-speed manual and a 4-speed torque converter are offered with this motor. Proton says that the engine will take the Ertiga from 0-100 kmph in just 11.8 seconds whereas the automatic does it in 13.9 seconds. In terms of efficiency, the manual will return around 19.23 kmpl (claimed) whereas the automatic goes 16.6 km to a litre of petrol. The top speed is around 160 kmph. In town, the automatic works really well whereas the manual makes more sense on the highway. The engine is in a sweet spot at 110 kmph whereas anything above it is a bit strained though doable. There is enough torque to carry around four passengers and their luggage whereas with seven passengers, it could be a huff-puff.

MacPherson struts in the front and a torsion beam set up at the rear have been carried over from the Suzuki vehicle. This means the slightly stiff organisation. The Ertiga rides well at moderate speeds, however, up the numbers on the speedo and you do realise that the car is a tad nervous. You will not be confident pushing it as well. In terms of handling, low speeds are taken well with body roll well under control. However, anything above a certain speed will be met with body roll.

The steering wheel is a nice and light unit. However, it lacks feel and any higher speed is met with a lifeless light steering dangling in your hand. Frankly speaking, no one expects the Ertiga to handle any better. The NVH is well controlled, however, the engine loses its composure at higher speeds. Ground clearance at 185 mm is a decent addition considering others from the segment come in a tad lower. This helps the Ertiga clear humps and the like very easily. Even with a full load that is.

All the variants of the Proton Ertiga get dual airbags, ISOFIX child seat mounts and ABS with EBD. There is no electronic stability control offered even on the auto trims - a miss in our books. However, the Ertiga has still notched up a four-star rating in the ASEAN NCAP tests. We believe the newer Ertiga to have a full five star rating given its vast safety suite.

So, should you buy the Proton Ertiga? At prices starting from RM 53,773 for the manual and RM 59,278 for the top-spec automatic, the Ertiga is a bargain. This is compared with larger hatchbacks as well as sedans. If you can wait, we suggest, go for the all-new car. It will be more expensive but will compensate that with the features as well as more space in the cabin.

The Proton Ertiga goes head one with the Perodua Alza, Toyota Sienta, Honda BR-V and the Toyota Avanza. Both the Toyota twins here offer more space and features than the Ertiga. The Honda BR-V is considered as an SUV and that is an added advantage to the buyer. For the Perodua Alza, it offers more or less the same space as the Ertiga but compensates it with a wider engine choice and slightly more economy.