Proton Ertiga: Which variant to buy? 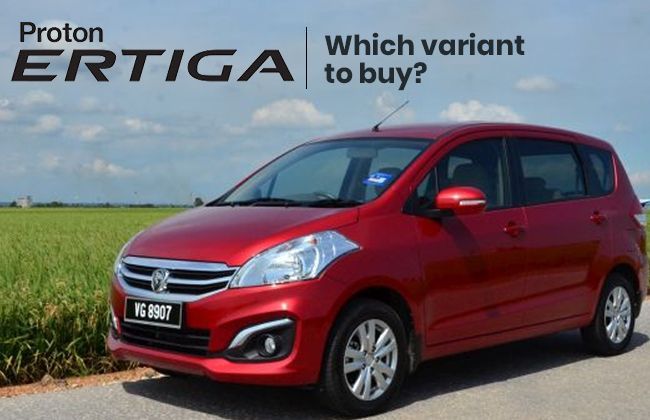 The Proton Ertiga is essentially a rebadged (not re-engineered) Suzuki of the same name. It’s built on the Swift’s architecture, albeit with some modifications, and in Malaysia, represents the marque’s most pocket-friendly MPV. With the rising popularity of affordable and compact people carriers in the country, Proton needed to fill a void, one that was being populated with the similar-sized Perodua Alza. To accomplish this in record time, Proton avoided going to the drawing board for an all-new design -- instead opting to go with the tried & tested method of changing the logo of the source OEM - in this case, Suzuki.

However, the Ertiga has been a proven platform in several countries, and since Proton didn’t have to alter it in any way shape or form, they could price it in the same vicinity of its arch-rival. Costing between RM 56,773 to RM 62,278, the Proton Ertiga offers the practicality of an MPV, without looking a lot like one. So, between the Ertiga’s three variants that are on sale, which one should you pick?

But before we answer that, first, a little intro…

The Proton Ertiga arrived in Malaysia in late 2016 and became the country’s first compact MPV that was EEV emissions certified at launch. The Ertiga measures in at 4265 mm in length, 1695 mm in width, 1685 mm in overall height, and has a wheelbase of 2740 mm - the latter is actually 10 mm more than what you’d find in the larger Proton Exora. Practically a six-seater, the Proton Ertiga houses a measly 135-litre boot behind the third row of seats and is equipped with MacPherson struts up front and a Torsion Beam/Coil Spring setup at the back.

The Ertiga is powered by a naturally-aspirated 1.4-litre four-cylinder petrol engine that dishes out 91 horsepower and 130 Nm of maximum torque - all of which make their way to the front wheels via either a 5-speed manual or 4-speed automatic transmission. The tuning of the whole powertrain is such that, even the apparently antiquated automatic variant delivers around 16 kmpl - a figure that jumps to 17.5 kmpl if you stick to the variant with the manual gearbox. Of course, if you’re expecting the Ertiga to be fast and nippy along with being fuel-efficient, it isn’t. While the Ertiga (automatic) can attain a top speed of 170 kmph (with a little bit of a tailwind), it requires nearly 14 seconds to get past the 100 kmph mark - making it far from brisk.

The exterior styling of the Proton Ertiga is fairly sensible, and while there are no attractive or curious design elements to be found, the styling isn’t controversial or mundane, either. The front fascia is adorned by a sizeable chrome garnished grille, flanked by large and upswept headlamps. The soft yet gently curving bonnet looks unfussy, while the distinct protrusions on the bumper along with its fog lamps and stylistic trim bits add a touch of sportiness. There’s nothing too extraordinary about the side profile of the Ertiga, though the subtly flared fenders, 15-inch alloy wheels, and a couple of character lines on the bodywork inject some sense of occasion. The rear of the Proton Ertiga is quite straightforward in its appearance and design -- there’s a pair of compact tail lamps that are accompanied by static reflectors and a thick chrome bar on the tailgate, large rear glass, and a moulded bumper with integrated reflectors and centrally-positioned rear fog lamp.

The interior of the Proton Ertiga is far from compact, except for the last row which does feel tight. The large greenhouse area feeds in quite a bit of exterior light, while at the same time making the cabin feel larger than what it is. As for its styling, the interior isn’t completely dull, but it’s surely lacking in spirit and excitement. For the price, the build quality and fit-and-finish feel decent, and originally being a Japanese product, there shouldn’t be any nasty reliability surprises in the future.

The most sensible variant

While the manual Executive variant of the Proton Ertiga is technically the most affordable one to buy, most buyers would benefit from the removal of the third pedal. And even though there’s an Executive variant with the automatic gearbox, the price gap between it and the fully-loaded Premium trim is marginal at best. Therefore, the top variant turns out to be the most sensible choice, all things considered. It also provides some extra goodies such as electrically-operated and folding wing mirrors, additional exterior chrome garnish, multifunction steering wheel with audio controls, seat height adjustment for the driver, passenger & driver side seat-back pockets, 6-speaker sound system, and a 7-inch touchscreen head unit with built-in navigation function, along with Bluetooth and DVD playback support.

All variants of the Proton Ertiga get a 4-star crash safety rating from the ASEAN NCAP, and are equipped with vital safety features such as dual front airbags, Anti-Lock Braking System (ABS) with Electronic Brake-Force Distribution (EBD), rear parking sensors, ISOFIX anchor points in the second row, and driver’s side “Anti-trap” window.