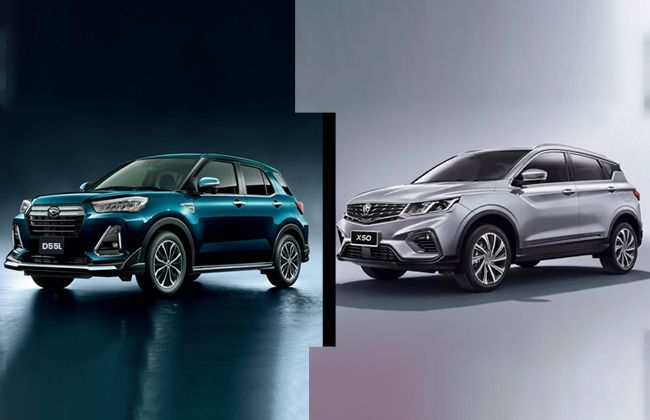 Earlier reports suggested that Perodua has been testing a new compact SUV for quite a while now. Things got a bit clearer when Daihatsu showcased its brand-new compact SUV called Rocky at this year’s Tokyo Motor Show. And then it was Toyota that launched its new compact SUV in Japan that goes by the name Raize, which is very identical to its subsidiary’s Rocky.

All these facts indicate that Perodua’s new compact SUV, which is codenamed as the D55L, will be based on the Daihatsu Rocky/Toyota Raize.

Now, on the other hand, Proton is working on its own new SUV, which is believed to be named as the X50. After joining hands with the Chinese firm Geely, Proton launched its first SUV called X70 in Malaysia, which proved to be a massive success.

The X70 was based on Geely’s Boyue, and it is being speculated that the new X50 will be based on Geely Binyue that was launched in China back in August 2018. Also, a disguised prototype of the same has been spotted going through some road tests here in Malaysia, which strengthens the fact that Proton’s next X50 will indeed be based on the Binyue.

Since Perodua and Proton are among the leading car companies in Malaysia, they are also each other’s direct rivals. So it would be interesting to put Perodua D55L against Proton X50 just to see what each of the upcoming cars have to offer. However, it is crucial to note that the former is an A-segment compact SUV, whereas the latter will fall into the slightly bigger B-segment and wouldn’t go against each other head-to-head.

The D55L has an attractive front end with features like LED headlights, blacked-out large grille, big sporty bumper with LED daytime running lights, and LED position lights as the eyebrows. We also like the way this compact SUV has been designed from the side. It doesn’t look out of proportions and at the same time, gives an SUV-ish feel perhaps because of the black cladding.

Some of its other key exterior features are-

It is no surprise that the Proton X50 looks very much similar to its elder sibling, the X70. It has the same set of LED headlights with LED DRLs, the familiar front grille, and that large bumper with big fog lamp housings. Mind you, we are not complaining. Even though the X50 is similar to the X70, it looks fantastic!

Some of its highlighting exterior features include-

Following is the comparison between the dimensions of Perodua D55L and Proton X50.

Since the D55L is smaller in dimensions, it takes a hit in the interior space. Not that it is claustrophobic inside, but accommodating three full-grown adults in the rear could be quite a task. Four people would be fine and comfortable.

The interior here features a black theme with red highlights at various places. We reckon that these highlights would change depending on the color of the car. There is a three-spoke, sporty steering wheel with some mounted controls and a large infotainment screen placed in the middle of the dashboard.

The X50 offers a lot more space than the Proton for obvious reasons. It also gets other premium features which the Proton would miss out. These include-

Also, the interior of the X50 looks more premium and well-finished.

In Japan, the Daihatsu Rocky/Toyota Raize has a 1.0-litre, 3-cylinder, turbocharged engine that puts out 97 bhp and 140 Nm of torque. The transmission here is a CVT unit. However, Perodua is likely going to replace that engine with its 1.5-litre, 4-cylinder, naturally-aspirated engine that it uses in its Myvi and Aruz.

The Proton also features a 1.0-litre engine, but it is much more powerful than the Toyota’s. It churns out a healthy 134 horses and 205 Nm of torque and comes mated to a 6-speed manual transmission. There would be another engine option - a 1.5-litre mill that produces 174 bhp and 255 Nm and comes equipped with a 7-speed dual-clutch transmission. We suspect that it is the latter engine option that will make its way to Malaysia.

Since the Perodua D55L is based on Toyota Raize and Toyota is always very serious when it comes to safety, the Perodua also benefits from this fact. It comes with some good safety features like-

We are pretty confident that the X50 will be given all the safety features of the Perodua D55L that we just mentioned except the pedal misapplication control. In fact, its list of safety features extend a bit longer and includes additional features like-

Right now, it would be too early to comment on the prices and availability of both these cars. However, we can say one thing about their prices, the Perodua D55L price would be much lower than the Perodua Aruz price (starts at RM 72,900). Similarly, the Proton X50 would definitely be cheaper than the X70, which has a starting price of RM 99,800.

So, with all the details mentioned above, what do you think of these two vehicles? 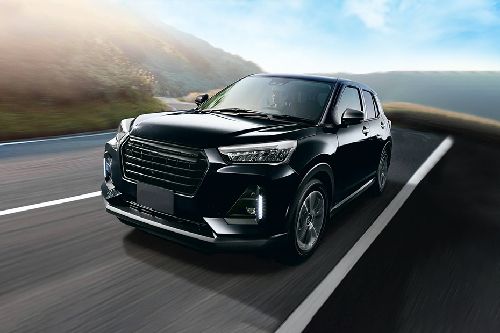