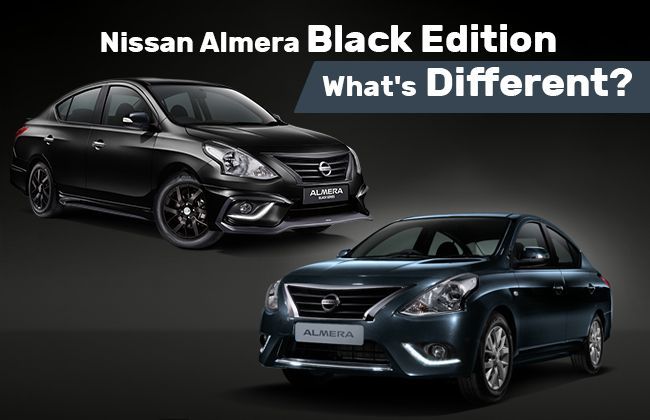 Nissan Almera came into existence in 2010 and has been around since then. While Nissan sells it under Almera nameplate in Malaysia; the sedan is available under Versa and Sunny moniker in global markets. Nissan has already given its B segment sedan a generation change, which is available in Thailand, and Malaysia will receive the 2020 version in coming months. The outgoing version of Almera was based on the K13 Micra underpinnings and features a rack and pinion steering with electrical assistance. Nissan offers Almera in four variants, powered by a naturally aspirated four-cylinder petrol engine paired with an automatic gearbox. It is available in two standard and two Black Edition variants.

In comparison, the standard version varies a tad from the Black Edition variants which comes with some additional elements both inside out. What are they and how it varies from the regular variants, we will discuss in this write-up.

On the outside, the Black Edition variant sports gloss black finished front grille, 15-inch gloss black Y-spoke alloy wheels wrapped around 185/65 R 15 tyres and gloss black side mirror cover. In addition, it comes with solar guard tinting on window glasses and TOMEI finishing with Titanium Accent on the front/rear bumper and side skirts. Also, the trunk lid spoiler is finished in gloss black. As for proportions, both the versions have the same proportions.

The insides of the Nissan Almera Black Edition features black door trim panel, black finished door armrest, and black door handles to match with the all-black interior colour scheme. Rest, it carries over the same styling from the standard variants. Also, the feature list is also identical save for the black edition logo.

The Nissan Almera specs sheet consists of a solo 1.5-litre, four-cylinder petrol engine with VVT technology. It makes 102 PS of maximum power along with 139 Nm torque. Transmission duties are carried over by an automatic gearbox, missing out on a manual unit.

There is no difference in cost in the regular and black edition Almera variants. However, the black series package can be availed on both E and VL grades for a premium of RM 8,500.

The only point of distinction between the regular Nissan Almera variants, and the black edition grades is the black livery available with the latter. Apart from this, both share the same mechanicals and feature list.