Toyota Harrier: What makes it different in the segment? 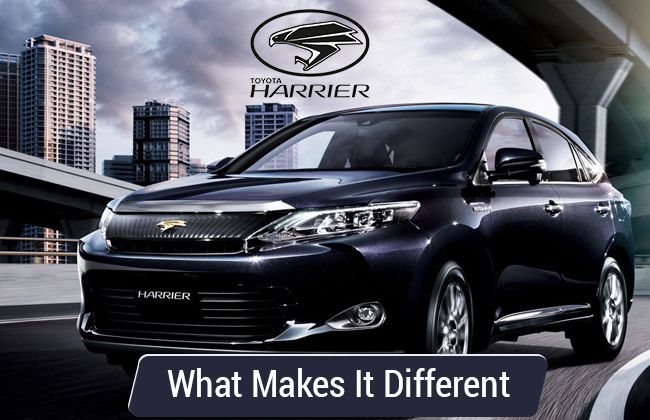 Toyota Harrier has been made exclusively for the Japanese market for many years after its debut. Gradually, Toyota started to export the Harrier to international markets with the Lexus RX moniker. Over the period of years, Lexus grew itself as a brand and Toyota continued to sell the Harrier as a separate model for the Japanese market. However, today the Harrier is exported to two other countries carrying the same name - Singapore and Malaysia. So, as the new Toyota Harrier is now available in our country, let’s see what are the features that make it worth the buy.

The design of the headlamps of a car holds a good share of the overall look of the front fascia. The all-new Harrier is a gorgeous SUV as a whole, but its headlamps themselves have a phenomenal design. There are three separate light sources in a single headlamp unit. These are square in shape and enhance the look of the SUV from the front. Combine them with a neat headlight assembly and you have a jackpot. The headlamps come with adaptive Hi-beam lights system.

The headlamps are accompanied by LED daytime running lights that make things that much better. Then we have the sequential LED turn indicators. These are very stylish and really pop out in the dark and attract attention. The front bumper features a strip of vertical LED lights on either side and there is a couple of fog lamps integrated into the wide front grille.

The rear end of the Harrier gets LED combination lamps for the tail lights. These are connected to each other with a red plastic that unfortunately doesn’t illuminate but still somehow manages to pull off the gorgeous look.

The interior of the Toyota Harrier is very well done. You’d find things to be situated at their precise location. One of the best features of the Harrier is its Panoramic Moonroof. It is quite large and when fully opened gives you a clear vision of the sky. This would really enhance the riding experience in the Harrier especially during night and in rain.

The seats of the all-new Harrier are very comfortable. They are wrapped in premium Nappa leather and provide great support. To further enhance the comfort level of the front occupants, Toyota has incorporated ventilated seats. This a great feature to have and you would really figure out the difference between them and normal seats once you use experience them personally.

We were glad to look at the Toyota Harrier specs for the Malaysian market. It comes with a powerful 2.0-litre engine that suits it perfectly. To pull an SUV of this size, the engine needs to generate a whole lot of torque in the lower rev range to make the most of it. Thanks to the Twin-Scroll Turbochargers, the engine on the Harrier produces 231 PS of power and an enormous 350 Nm of peak torque. These numbers aid the 6-speed automatic transmission to bring the front wheels in motion. The blend of this engine and transmission works together brilliantly to give out an optimal performance and fuel efficiency.

The brand name itself weighs a lot. When a car wears the Toyota badge or logo, it gains all the qualities that come with it. A synonym for reliability, Toyota cars give a peace of mind to its owners. The Harrier is no exception. And to give you a greater peace of mind, it comes with 5 years warranty with unlimited mileage. Also, Toyota’s vast service network spread nationwide is also a USP of the Harrier.