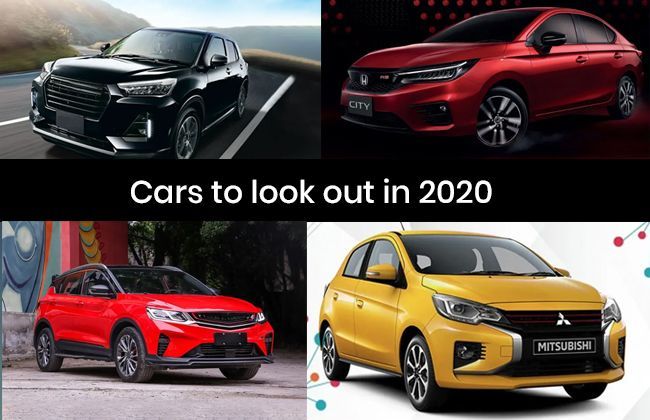 We are about to complete the first month of 2020 and so far we have already witnessed a couple of big launches. 2020 Perodua Bezza was brought in the Malaysian market and earned a lot of attention. We also had the new Mazda CX-30 that was launched earlier this month. So, we were wondering, we have the entire year in front of us and that got us thinking about the cars to look out in 2020.

We have been seeing prototypes of Proton X50 since early 2019. Lately, this sub-compact SUV has garnered a lot of attention and reached the headlines of many automotive websites. This indicates that it Proton is all-set to launch the X50, perhaps sooner than we’re expecting. Based on Geely Binyue/Coolray, the X50 will be Proton’s second SUV and considering how brilliant its first SUV (Proton X70) has been, expectations from the X50 have skyrocketed. Here are some of the key highlights of the Proton X50-

To give direct competition to Proton X50, Perodua is prepping its own sub-compact SUV that goes by the codename D55L. We’ve heard about it in the past, however, now we know that it will be based on Toyota Raize. The D55L will have attractive features like LED headlights, blacked-out front grille, sporty bumper with LED daytime running lights, and LED position lights as the eyebrows. It would also have 17-in alloy wheels and LED rear combination lights. Under the hood of the Toyota Raize is a 1.0-litre, 3-cylinder, turbocharged engine that puts out 97 bhp and 140 Nm of torque and is mated to CVT. However, Perodua is likely going to replace that engine with its 1.5-litre, 4-cylinder, naturally-aspirated engine that it uses in its Myvi and Aruz.

Since the D55L is based on a Toyota, we are expecting it to have numerous safety features like-

Launch and price of the Perodua D55L are still unknown but it should hit the dealerships in 2020.

Just like in various other international markets, Honda City is one of the most popular sedans in Malaysia, too. It has been around for many years now and perhaps, it is the right time for it to be replaced by the next-generation model - the 2020 Honda City. Honda launched the new City in Thailand in November 2019 and since then we have been waiting impatiently for Honda Malaysia to bring it in our country. However, we still have no official word about the car’s launch.

Considering the immense popularity of the City in the country, we are expecting and hoping that the new 2020 Honda City is launched as soon as possible.

Unveiled last year at an event in Thailand, the new Mitsubishi Mirage is one of the new hatchbacks that we are expecting to be launched in Malaysia. Currently, Mitsubishi does not have any hatchbacks on sale in our country. It only sells Outlander, Triton, and ASX - all big vehicles. With a new hatchback, Mitsubishi will enter a new segment which should give it a wider audience.

We have seen the current-gen Mirage that is on sale in some of our neighbouring countries. It looks like it could do with an updated. And the new 2020 Mitsubishi Mirage seems to be just the right replacement. It gets the brand’s latest Dynamic Shield design for more visual appeal. It also has new interior features like more comfortable seats, a 7-inch touchscreen infotainment display, etc.

Powering it would be a 1.2-litre 3-cylinder MIVEC petrol engine that delivers 77 bhp of max power and 100 Nm of torque. Let’s see when does the new Mirage make it to our shores.

These were some of the cars to look out in 2020. We will be updating you guys with all the latest updates about these models. So keep checking Zigwheels Malaysia.

Also Read: Cars X50 holds a threat to in the segment