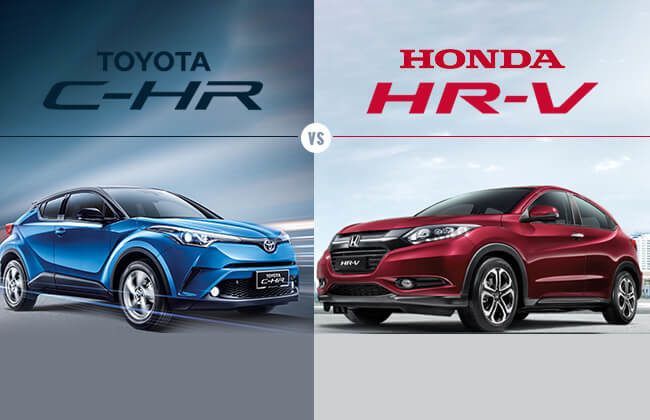 Think of SUVs and the big burly ones come clambering in your dreams. Well, not everyone can afford the big ones. So, most of them settle for something smaller but of a similar silhouette. In Malaysia, it is but natural that most of us prefer going for compact SUVs, the ones that are affordable and at the same time, lend a premium feel to things. They can be easily parked, come with cutting edge technology, have enough space for five and in some cases, even seven, have a good ground clearance and most of all, the engines are efficient too. The two examples on this page are exactly all that we have just mentioned. Ohh and both come from the ‘Land of the Rising Sun’. So, this makes it a duel between equals. So, let's cut the chase and get on with the comparison.

The Toyota C-HR looks radical. It looks like Toyota took a leaf from its premium child, Lexus and designed the C-HR. We quite like the bold styling of the C-HR. The car looks like it was meant to be an electric or something with virtually no grille at all. A flat grille combined with the aggressive stance works and looking at the queues at Toyota’s showrooms, it is but natural that the design language has worked. The alloys that Toyota has given also have a sexy pattern. Try finding the rear door handle and you see that this Toyota is more about form than function, with grab handles being situated horizontally in the C-pillar. In fact, the name itself, C-HR stands for Coupe High Riding vehicle and the SUV is indeed a coupe wearing stilettos. The rear looks even more outlandish with those boomerang-shaped tail lights.

The Honda HR-V in the meanwhile looks like a proper soft-roader moulded from the same frame as the CR-V. The V-trim gets LED headlamps with LED DRLs. The mesh grille which has now become a Honda family face and that bar extending from one headlamp lend it some flair. The coupe-ish rake toward the back continues and the rear grab handles are still tucked into the C-pillar. Honda has also added 17-inch alloys as standard. Overall, the Toyota C-HR is dimensionally bigger than the Honda HR-V.

Overall, while the Honda HR-V looks like any other crossover there, the Toyota stands out for its design.

The cabin space of the Honda BR-V or for that matter any Honda usually is class leading. The HR-V leads the Toyota here. There are a couple of cup holders around and Honda’s “Man Minimum, Machine Maximum” philosophy has been applied here too. The raked windscreen too makes way for more passenger room. There is a touchscreen system that doesn’t support Apple CarPlay or Android Auto. There is single zone climate control and Honda uses the Magic Seats to its advantage here. These can be altered at will to suit the whims and fancies of the buyer. Overall, it seems well put together.

For the Toyota C-HR, things are quite compact in the cabin. The front seats are supportive while the rear perch is more suited for those with a smaller frame because of the coupe-roof line. There are many features but none of them are a standout from what the Honda offers. Even Toyota doesn’t offer smartphone connectivity with the touchscreen system. Luggage carrying capacity of the HR-V is also larger by a big extent than the C-HR.

The Toyota C-HR uses a 1.8-litre petrol engine that uses dual VVT-i and four cylinders to make 140PS of power and 171Nm of torque. The engine is mated to a CVT gearbox which has seven ratios. Brisk progress in traffic can be achieved with this transmission provided you don’t actually step on the accelerator like it was the tip to open the dustbin. The NVH from the engine is very low and you end up appreciating the quiet afforded. The 0-100kmph speed is dispatched in 9s while the top whack is closer to 190kmph. The Toyota C-HR returned an overall fuel efficiency of 12kmpl.

In contrast, the Honda’s engine while being a similar specced unit, makes 142PS and 172Nm. It is paired to a CVT and gets paddle shifters too. We found this engine to be a decent performer because it not only has good grunt lower down but also revs quite high. The paddle shifters make it a joy to use. The engine is audible though inside the cabin, one of its downsides. The efficiency though is better than the heavier C-HR and the HR-V returned close to 13.2kmpl overall. The top speed is lower as compared to the C-HR’s at 180kmph. 0-100kmph was done quicker than the C-HR at 8.7s.

We prefer the Honda’s unit here.

The Toyota C-HR’s ride quality is very composed and stays flat at all speeds. It is only when one goes over a bump that there is a knocking sound coming in from the boot. It is but a small thing and isn’t really intrusive. The handling is exactly how you expect from a sport coupe. Sharp and precise. Body roll is very well controlled and the C-HR is eager to tip into corners. The steering too is very well tuned and dials in plenty of feedback. Best of both the worlds then!

Honda has tuned the HR-V to be a better riding car than to be an outright handler. This doesn’t mean it handles badly. It is just that you know that the car doesn’t like to be pushed. The suspension takes care of the potholes very nicely but at higher speeds, the taller stance means that lateral winds do affect the car’s stability but slightly. The NVH though is on the higher side of things and Honda could do well to put in some insulation under the hood.

In the meanwhile Honda offers the HR-V with six airbags, Hill Assist, ISOFIX mounts on the rear seats, Auto Brake Hold, Vehicle Stability Assist and multi angle rear view camera with sensors at the back. The Honda HR-V too has received a good rating from its crash tests.

Prices for the new Honda HR-V starts from RM 92,545 for the base and moves up to RM 112,111 for the Mugen trim. Pricing strategy from Toyota though is premium and the HR-V gains from it immensely in the sales chart. Toyota has priced the C-HR SUV at RM 137,299 and there is a lone trim on offer. At this price point, you begin to overlook the few flaws that the HR-V has and it makes sense to go in for the spacious and fuel efficient Honda.