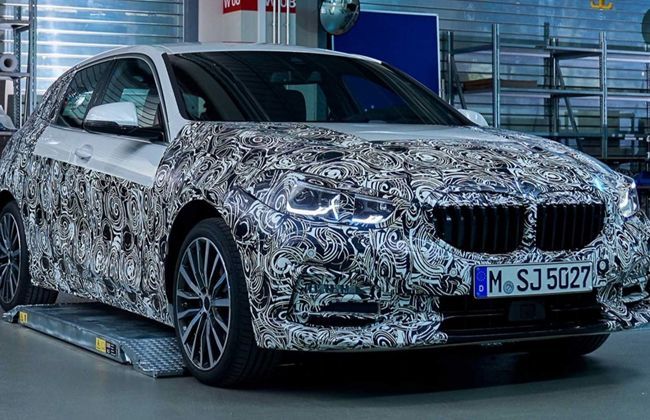 KUALA LUMPUR: BMW likes to do things differently, giving testament of it today is the unusual unveiling of the next-gen 1-Series. Adopting the modern-way, the automaker chose Instagram to go forth with its new hatch unwrapping. In BMWs Insta stories, the car can be seen slowly breaking out of the camouflage sticker shell. And it is a sign that the 1-Series will soon see the light of the day.

The all-new 1-Series takes design clues from the next-gen 3 Series, and that is clear despite its hidden livery. The upcoming BMW hatch looks bolder and sleeker than its predecessor. On the outside, the car in the Insta stories showcased a large dual kidney grill, eye-catching headlight, bigger lower air intake, and a chin spoiler. All these features hint towards the car being an M-Sport model. It is the back side where the design changes are most apparent. Elements like a bigger tailgate, new rear spoiler, and revised taillights give the car a fresh look.

Apart from the noticeable revision on the outside, the German automaker also gave us a peek of the car’s cabin. The upcoming BMW 1-Series showcases a redesigned dashboard that features an all-digital instrument display. Speaking of which, the driver will be able to view info like points-of-interests, navigations, rev counter and a speedometer on the new display. However, there is no word whether or not this feature will be standard across the range.

As for the performance specs, the new 1-Series will be powered by a Twin Power Turbo engine that’s one of the most powerful mills ever built by the automaker. It is claimed to churn out 300 hp of power and will come with reinforced internal and optimise fuel injectors. Also, the hatch will no longer be a rear-wheel-drive model, and this is also expected to come in hybrid and turbo-diesel trims.