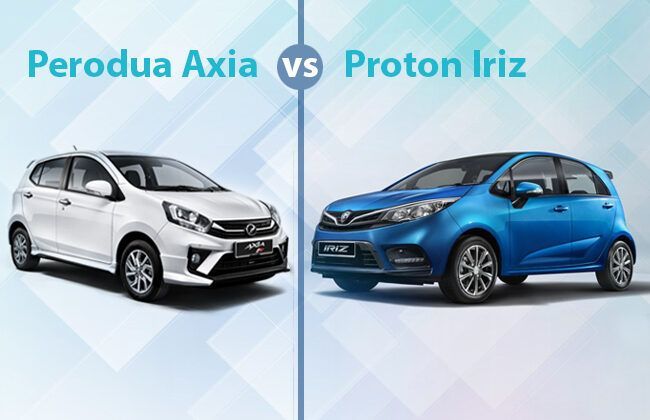 Perodua and Proton are among the top and most successful car companies in Malaysia. And that makes them each other’s prime rivals. Since both of these brands have been in the market for many years now, they know the market inside-out, which makes their rivalry even more intense and interesting.

And in the middle of this battle, it is us the consumers who are benefitted as brands roll out more and better products at competitive prices. Clear examples of this phenomenon are the Perodua Axia and Proton Iriz. And today, we are going to compare the two cars.

Which is better-looking, Perodua Axia or Proton Iriz?

Ans. Well, looks are quite subjective, but we can’t ignore the fact that the latest Axia is very appealing, especially the Style variant, which kind of has a self-explanatory name. Perodua added some features that make this variant look apart from the rest. These features are-

On the other hand, the Proton Iriz has its own features that help it lure potential buyers. These include-

Since both the Axia and Iriz and A-segment cars, space on the inside is very limited. They are best suited for accommodating four adults. You might be able to fit a third person at the back, but that wouldn’t be comfortable for long.

Some interior features of Perodua Axia are -

What interior features does the Proton Iriz have to compete?

Ans. Well, there aren’t any high-end features as such. Things like touch screen infotainment system with smartphone connectivity options, navigation, bottle holders, etc. are common in this car as well. However, to add a bit of premium-ness, the Iriz gets semi-leather seats and leather-wrapped steering wheel.

Perodua’s latest Axia is available in six variants, and the same engine powers all of them. Perhaps, this is one of the reasons that enable Perodua to price the Axia as low as RM 24,090! Powering the Axia is a 1.0-litre engine that churns out 67 bhp and 91 Nm.

This is the area where the new 2019 Perodua Axia excels in its segment. In fact, when launched, the new Axia was highly praised for its advanced safety features that are Advanced Safety Assist (A.S.A) 2.0 and Pre-Collision Warning and Braking with pedestrian detection.

You will not find any such safety features in the Proton Iriz specs sheet. However, it does get all the other ones that are expected from a car of its segment and which are also common between it and Axia. These features are-

What is the starting price of the Perodua Axia?

Ans. Interestingly, the Perodua Axia price starts at RM 24,090, which perhaps makes it the most affordable car in the country. However, with this price, you get the most basic E MT model.

Following is a detailed price comparison -