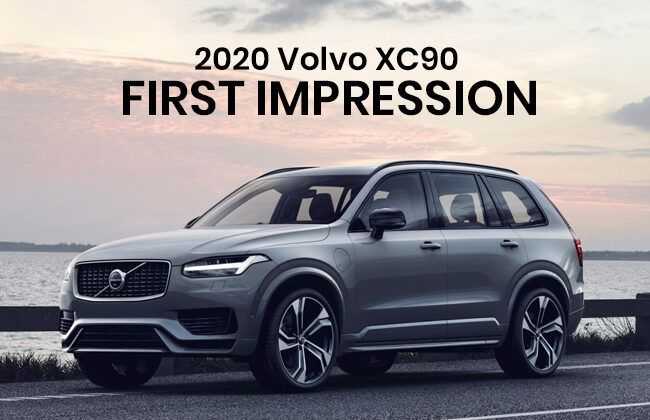 Volvo XC90, one of the best and top-of-the-line luxury SUVs, has received a facelift for the 2020 model year. Being a facelift, not much has been changed in the SUV, and we think that’s alright because the XC90 was already a phenomenal car in the first place. Anyway, since we have a new model, we are obliged to have a look at it, so here is our first impression of the 2020 Volvo XC90.

Ans. We always loved the way Volvo design its cars and the XC90 is no exception. It was an eye-catcher before, and it is even now. Most of the exterior features of the XC90 have been retained in the facelift. However, there are some new additions as well. They are-

The rest of the SUV remains more or less the same and continues to be as elegant and stylish as before. Do let us know, what is your favourite aesthetic feature of the XC90.

Ans. As we mentioned earlier, the XC90 is a very luxurious vehicle. Sitting inside one is a totally different experience. It cocoons you in its opulent cabin and keeps you safe. Volvo has taken care of every minute detail to make sure you are as comfortable as it gets.

Talking about the new features in the updated XC90, there is this Orrefors crystal gear knob in the top T8 Inscription model. It looks great and reminds you how special, privileged, and blessed you are to being inside an XC90.

Also, the T5 variant now gets AC vents in the C-pillar for the 3rd-row passengers, road sign information system, four-zone climate control, and a cooled glovebox. The most significant update in the interior has to be the fact that the new XC90 now comes with a six-seat configuration along with the previous four-, five-, and seven-seat configuration.

Are there any changes under the hood?

Are there any changes in the XC90 safety features?

Ans. Everybody knows that Volvo makes some of the world’s safest vehicles. The top-of-the-line XC90 is loaded with advanced safety features that will keep you safe in various situations. You would be amazed to know that the new 2020 Volvo XC90 has the ‘City Safety with Automatic Brake’ technology, which is the only one in the market to detect pedestrians, cyclists, and large animals.

The new XC90 also gets Steering Assist for its City Safety and Blind Spot Information systems. Volvo added the Oncoming Lane Mitigation system as well. You will also find the Park Assist Pilot (parallel and perpendicular parking) and 360 surround-view camera (T5 rear only).

These were some of the key changes in the new 2020 Volvo XC90. We always welcome a facelift like this, and the fact that Volvo is providing all that at the same price is applaudable. Yes, that’s right! The new 2020 Volvo XC90 price remains the same. It starts at RM 373,888 and goes all the way up to RM RM409,888.

We really like the new XC90. What about you?