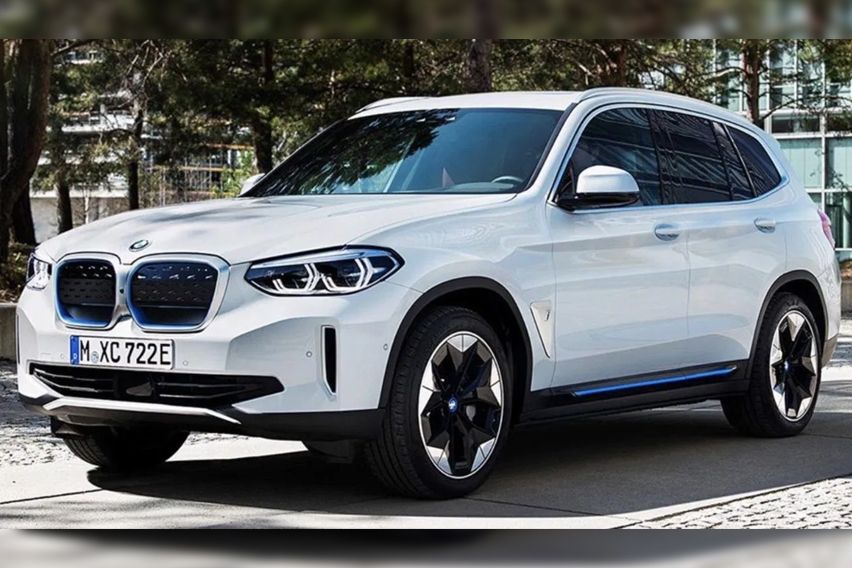 KUALA LUMPUR: An Instagram user by the name CocheSpias has shared what appears to be the official images of the upcoming BMW iX3. The appearance of the G01 BMW X3 pure electric version is unsurprising and entirely expected.

The car in the images shows a large kidney grille that isn't joint in the middle, like in the BMW concept car. It is coupled with a signature four-eye look, and there is an air of familiarity with the iX3 as well, which is a good thing. However, the EVs grille misses out on the vertical slates and is mostly closed, except for the nostrils at the bottom.

Compared to the ICE-powered X3, the bumper appears rather minimalist with only vertical intake strip at the corner to break up space.

Moving to the side profile, we see BMW Aerodynamic Wheel with a two-tone 'flower' look. The automaker has used aluminium base wheels with individually designed inserts to make the aero units. The said design helps reduce the drag by 5% compared to the regular X3 rim. Also, these are 15% lighter compared to the previous aero wheels by the company. This result is 2% less power consumption and a 10 km extension in vehicle range. Note, the wheel inserts can be customised as per customer's taste.

On a closer look, we see the wheelbase gets a blue stripe that also appears at the rear lower bumper - on flaps that replaces the tailpipe exits. Though not so clear, but we see blue accents on the grille as well. Overall, it is a modified design with a few changes to make the iX3 look like an EV.

The BMW iX3 will be the first to benefit from the company's fifth-gen eDrive technology. It is an in-house system with all components from the battery to the electric motor produced in-house at BMW owned facilities. This technology will be used in the future in EVs with different body styles.

The fifth-generation BMW eDrive consist of a drive unit with an electric motor, transmission, and system electronics all housed together. It is a compact setup, and the automaker has also enhanced the motor output and weight ratio of the drive system by 30%.

In the BMW iX3, the electric motor makes 286 hp of maximum power and 400 Nm of peak torque. The cells can be grouped into modules, and the new prismatic battery is scalable. BMW claims that the battery is placed in a very flat position that doesn't affect the passenger or boot space. In the WLTP test cycle, the 74 kWh battery provided over 440 km of range, and the electric SUV claimed consumption of under 20 kWh per 100 km.