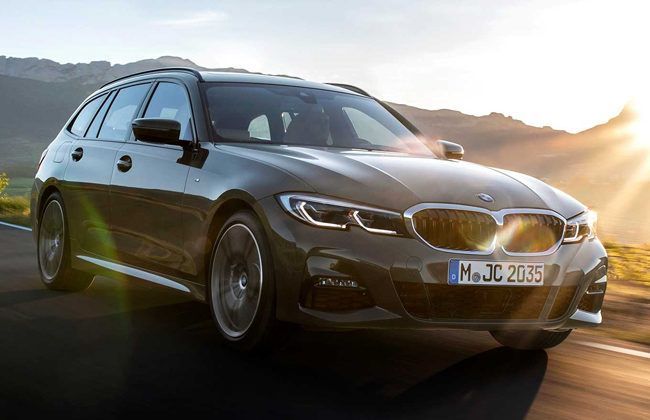 KUALA LUMPUR: For customers who require more practicality from their high-end luxury car can now check out the new BMW 3 Series Touring. It surely takes the lead in the department over its sibling, the 3 Series Sedan.

However, the larger dimension does not tally with more weight. Instead, the new model is 10 kg lighter than before, thanks to the use of aluminium and high strength-streal. There’s also a jump of 25 percent in the car’s overall rigidity, and it now has a weight distribution of 50:50.

On the exterior, one can see a striking similarity between the 3 Series Sedan and Touring models. The car features similar elements like slim headlights cluster, and large kidney grille. The former unit gets add-on functions like Adaptive LED headlights with BMW Laserlight systems being optional. Speaking of optional features, the list includes LED fog lamps resting on the outer air intake with Air Curtains on the T-shaped horizontal element. The above function is limited to the Luxury Line and Sport line trims. The M Sport variant, on the other hand, gets a more aggressive bumper with larger air intakes.

The rear now showcases a 30 mm wider back window and like before can be opened separately for quick access without needing to open the tailgate. Also, the present is the L-Shaped taillights that fund on all trims except for the M Sport variant.

One of the key highlights of the new 3 Series Sedan is its cargo area. The boot now is 112 mm wider and 30 mm higher in its loading aperture. With all seats up, the car offers 500-litre of capacity with maximum going up to 1,510-litre.

Cabin features on the 3 Series Touring are as follows -

Talking about the car powertrain options, there are many both on the petrol and diesel front. Starting with the petrol units, we have -

The diesel options include -

We are doubtful about the car’s arrival in the Malaysian market. Worry not, the German automaker has an amazing lineup on offer in the local market.