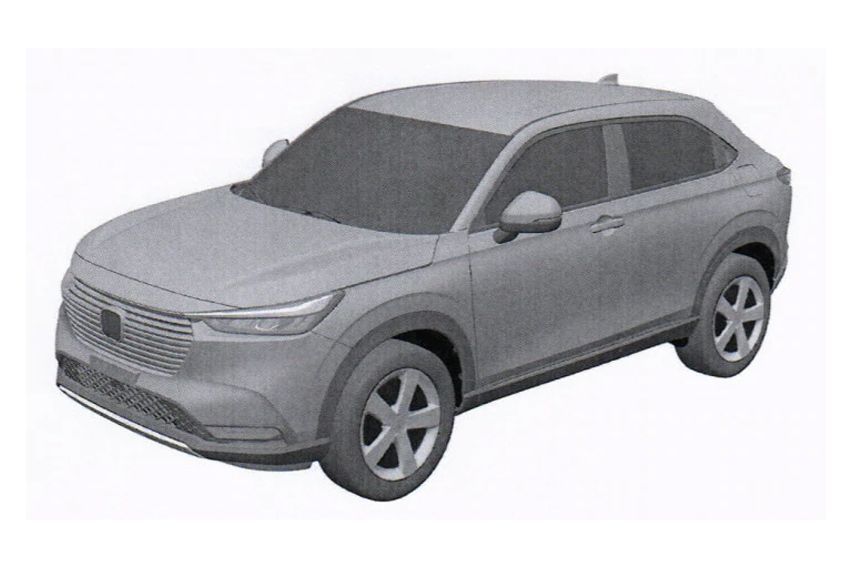 KUALA LUMPUR: Next-gen Honda HR-V is making a lot of buzz these days - sometimes with its spy shots and other times via official teasers. Well, whatever the case, we enjoy seeing how Honda’s SUV has evolved. With its official debut scheduled for February 18th prior to which we get to see the car’s leaked patent images.

The new Honda HR-V seems to have retained most of the design elements from the ongoing model with some obvious tweaks here and there. For instance, at the front, we see a massive grille, a more upright nose, and a new set of headlamps with what seems like LED DRLs on the upper edge.

Moving to the car’s side profile, the upcoming HR-V like before sports a crossover-like stance and we aren’t complaining about it. The outgoing model’s C-pillar mounted rear door handles can be seen in the images.

The rear now benefits from brand new taillights that seem to be connected via a bar that might be illuminated or of chrome.

We are yet to get a glimpse of the car’s cabin, however, it is speculated to feature a roomy cabin benefiting from several upgraded features. For example, a larger than before touchscreen infotainment unit. It is expected to continue with the current model’s dual-zone climate control, cruise control, idle engine start-stop panoramic sunroof, etc.

Though not much is known about the new HR-Vs specs, we know for sure that it’ll benefit from the company's e:HEV powertrain. In the City, this poweplant setup combines a 98PS/127Nm 1.5-litre petrol mill with two electric motors with the main unit churning 109PS/253Nm. The secondary motor is primarily a starter generator.

The upcoming HR-V is expected to come along with an upgraded safety kit. So, six or more airbags, rain-sensing wipers, and more.

Once launched, the third-gen model will go against the likes of VW Taigun, Kia Seltos, and Jeep Compass.