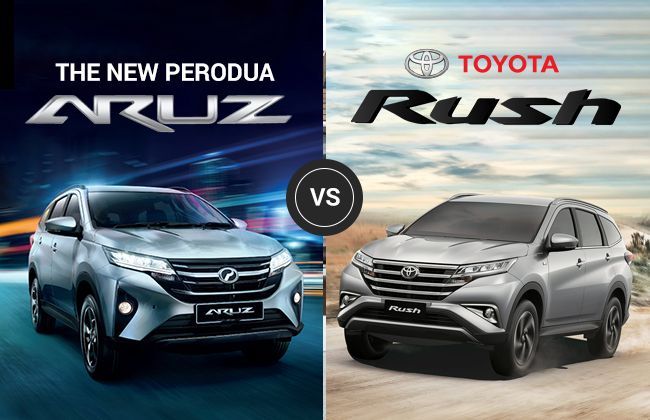 Tell us, if we are wrong in saying that the competition in the SUV segment is hotter than before. First came in the C-segment SUV, the Proton X70 and now we have one decorating the B-segment market, the Perodua Aruz. It’s like both the Malaysian born automakers are doing their bit to keep the buyers satisfied. Like all, the Aruz too requires to fight its way in the segment, as the same is already stocked with some mammoths. One of which is the Toyota Rush, the car that graced the Malaysian market only in October 2018. So, let’s see what the two cars have to offer and which one is the better pick.

Starting with the new bee in town, the Aruz benefits from an aerodynamic body that is adorned with distinctive accents all over. The front gets a multi-slate chrome and glossy black finish grille. Further adding to the beauty are the LED headlamps with follow-me-home function and light guides. The fog lamps are available with the range-topping AV variant, much like the silver painted front bumper. On to the side, the 17-inch wheels rule, while the sporty roof rail and stone guard add to its sporty appeal in higher trim. The rear benefits from a wrap-around combination tail lamp and spoiler. Adding to the looks on the Aruz AV trim are added silver garnish on the rear bumper and tailgate.

The Rush too is quite an onlooker and is a combination of style, beauty, and luxury. Like the Aruz, the Rush sports a layered grille, the only difference is that here it's all chrome. The LED headlights come equipped with daytime running lamps. The fog lamp, roof rails, and stone guard are standard offerings in the Rush. Both the Rush variants ride on 17-inch alloy wheels. Overall, both the cars look great. However, the Rush is slightly more aggressive looking with its R-Blade body kit.

Comparing the interior of the two cars, we find the cabin significantly different. Especially the dashboard design, the one on Aruz features silver trims that help shape the centre stack and also highlight the air-con vents. Both the trims - the X and AV feature Perodua’s 7-inch infotainment unit below which rest the controls for the single-zone manual air-conditioning system, and second-row air blowers. Talking about differences, while the base trim features fabric upholstery, the one on AV is all leather. Also, the steering wheel and gear knob are wrapped in leather in the top trim, and it also gets a plush looking piano black coating on the dash. SmartLink functionality and integrated driving video recorder are a few added benefits seen on the Aruz top trim.

Like the Aruz, the Rush display a 2+3+2 seating layout with 60:40 split function in second and 50:50 in the third row. Included in its standard kit are features like - a 6.8-inch head unit with screen mirroring function, single-zone air-conditioning with rear vents, keyless entry and start Panoramic View Monitor with four cameras, and Toyota AutoTag built-in SmartTAG. So, more or less it replicated the Aruz specs.

The Perodua Aruz gets its power from a 2NR-VE 1.5-litre 4-Cyl petrol engine that produces 105 PS of max power and 136 Nm of peak torque. The 7-seater SUV gets a single transmission option - four-speed automatic unit that sends power to the rear wheels. The company claims a fuel economy of 15.6 kmpl from this Energy Efficient Vehicle mill.

Toyota Rush spec sheet shows the same mill doing duty under its hood as the Aruz. And don’t be surprised to know that the same engine is found in the Perodua Myvi and even in the latest Avanza.

Toyota also puts forward a steady foot on the safety front. It impresses buyers with the Safe-T Plus package of which are part 6 airbags, Vehicle Stability Control, ABS with EBD and BA, Hill-start Assist Control, Emergency Stop Signal, and Pre-collision System (exclusive to the top trim).

Both the Aruz and Rush are great options in the B-segment SUV arena. They feature similar dimensions and engine specs. With a few alterations in the exterior and interior design, even their feature list mostly tallies. It’s, however, the Advanced Safety Assist (ASA) 2.0 safety tech in 1.5AV trim of Aruz that’s most impressive. In crux, we can say that the Aruz is an inexpensive version of the Rush, with its range-topping variant packing-in some great features. 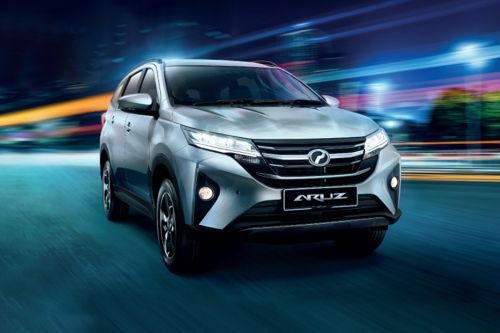 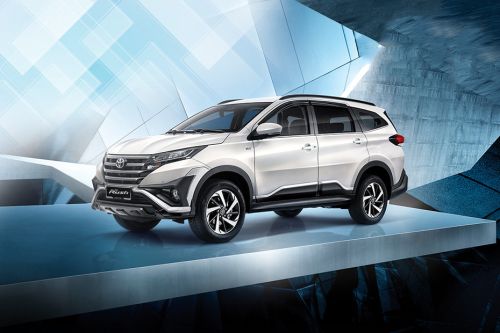