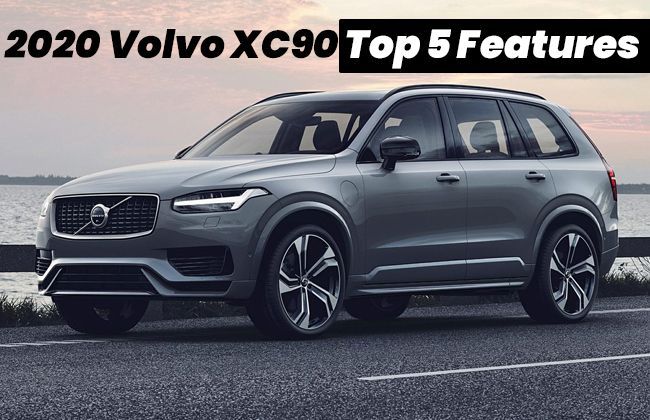 Volvo cars have a very distinctive aura. Don’t you think so? We mean that nowadays we get to see Beamers and Mercs more often than ever before. Perhaps, that is one of the reasons why some of them have lost the oomph factor. However, Volvos continue to charm us with not only their designs but also with the advancements they have achieved in vehicle safety.

Everyone knows that Volvo cars are among the safest cars in the world. And Malaysia just got the 2020 model year Volvo XC90, the top-of-the-line SUV. The recently launched 2020 Volvo XC90 is a facelift and brings some new features to the table. Here are its top 5 features.

When it comes to the engines, the 2020 Volvo XC90 specs sheet remains mostly the same. It continues to have two engine options - a 2.0T powerplant that churns out a max power of 254 bhp and produces 350 Nm of peak torque powering the T5 variant and then there’s the T8 Twin Engine plug-in hybrid engine.

Volvo hasn’t changed the figures of the engine - 407 bhp and 640 Nm - however, it did increase the battery capacity from 10.4 kWh to 11.6 kWh. For a hybrid engine, this means that the power output from the motor would also go up. And it did. The total or combined power output of the T8 Twin Engine plug-in hybrid engine is now 420 bhp!

Does the increased battery capacity has any other benefit?

Ans. Well, yes. With more battery power, the new Volvo XC90 can run for longer on pure electric power. In fact, Volvo says that the range has been extended by 15% than before, meaning that the SUV can travel 50 km on just battery power. Isn’t that impressive?

Volvo just took another step forward in a world where its cars are safer than ever before. On top of many advanced and high-end safety features, the new 2020 Volvo XC90 gets a few more.

Ans. To begin with, we have the ‘City Safety with Automatic Brake’ technology, which is the only one in the market to detect pedestrians, cyclists, and large animals. We also get Steering Assist for the City Safety and Blind Spot Information systems. Volvo added the Oncoming Lane Mitigation system as well. Apart from these, we also have the Park Assist Pilot (parallel and perpendicular parking) and 360 surround-view camera (T5 rear only).

Most of the design elements of the new XC90 are the same, however, Volvo did change a few of them to justify the facelift tag. So, we have a redesigned front grille. It now gets more chrome and vertical slats which are kind of concaved inside for a more distinctive appearance.

The overall design of the front bumper of the new XC90 is very much the same, however, Volvo has added more chrome garnishing. For some unknown reason, chrome is considered to be a premium element, maybe that’s why we get to see more of it in high-end cars. And perhaps, that’s why Volvo added it in the new XC90; to increase the premium-ness.

Do you like chrome? Let us know in the comments.

How many colour options does the new XC90 have?

The XC90’s cabin is spacious and super comfortable (T5 variant now gets AC vents in the C-pillar for the 3rd-row passengers, four-zone climate control). It is also loaded with various luxurious features and materials. And why shouldn’t it be? After all, the XC90 is Volvo’s top-of-the-line SUV. So to keep things interesting, Volvo added a new Orrefors crystal gear knob in the latest XC90. Shifting gears wouldn’t have been any more exciting, we guess!

Mind you that the new Orrefors crystal gear knob is available only in the range-topping T8 Inscription model.

These were the top 5 features of the new XC90. We would also like to share that the 2020 Volvo XC90 price remains unchanged. This is a great gesture by the company for its customers.