The Malaysian B-segment crossover market is at its prime, with automakers introducing new and stylish products in the segment. The latest being the Kona crossover coming from the house of South Korean carmaker, Hyundai. This super sporty offering is available in three trim options, all completely built-up units imported from Korea. Another striking offering comes from our very own national automaker Proton, the X50. It was launched a while back and secured high sales figures for the brand.

Now with both the cars in the market, it is obvious that customers will have a hard time deciding which one to pick. It is for the same reason we decide to put the two cars against each other and come with a solution. So, let's put the X50 and Kona in the ring and put them against each other in terms of exterior, interior, performance, safety, and price.

The specs mentioned above clarifies that compared to the new Kona, the X50 is a bit longer, taller, and also has 10 mm higher ground clearance. It may not seem much of a difference on papers but on-road every millimetre makes a difference. However, it is the boot area where the Kona has secured some major points.

From the looks of it, both Proton X50 and Hyundai Kona portrays a rugged and sporty appeal. They look modern and carry a design theme to impress young buyers. Instead of these basic similarities, the two cars have a very distinct front fascia that liking of which is subjective.

The X50 is almost identical to the Binyue with certain clues shared with its bigger sibling, the X70. It is a good thing as both the models are appreciated for their design language. The Kona, on the other hand, the brand’s cascading grille and other sporty inclusions give it a unique, distinctive look.

It seems like the Kona has a lot more to offer in the base trim, however, as we move up the variant ladder the exterior features remain more or the same.

Proton and Hyundai have put in a lot of effort to make the X50 and Kona comfortable and convenient, both for the driver and passenger. Let’s see what the two compact crossovers offer, starting with the X50.

The Proton X50 is less expensive than the 2020 Kona, however, it still is packed with a reasonably good standard feature kit. And moving up the trim ladder, the National automaker has included several features giving the vehicle a premium look & feel.
As the all-new Kona, its high price tag is justified by its long feature list than be it the cabin comforting options or its safety profile. 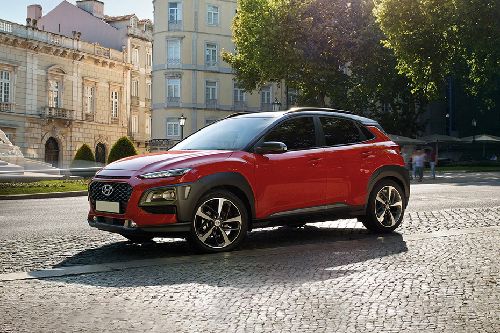