Proton X50: Features we hope to see its specs sheet 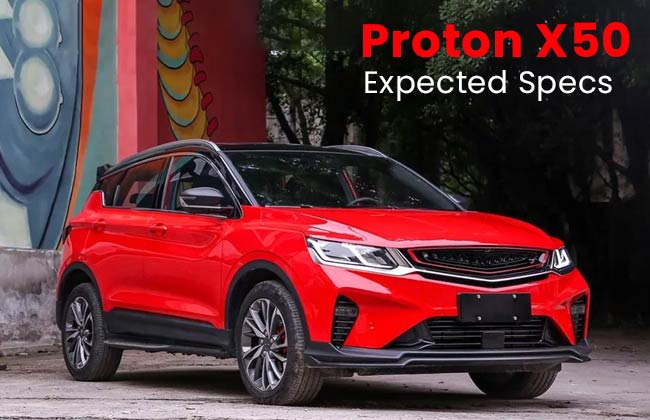 It is no secret that Proton is prepping to bring its small SUV, X50 in the country. The petite model has gained a lot of traction in no time, which is working well in its favour. With sub-four meter SUVs occupying a large chunk of the market, Proton is all set to roll out its contender, which could be a game-changing model in the segment, given its estimated pricing. Currently, this segment has models like Ford EcoSport, Honda HR-V and Toyota C-HR, that have been well-accepted by the consumers.

Meanwhile, Perodua is also developing D55L, which will be a direct rival to the X50. Backed by heavy localization, it is estimated to be priced aggressive; however, it will be interesting to see if it undercuts the X50. Speaking of equipment list, we hope to see most of the features that are available with other sub-four meter models, and a handful of other bits which could set a benchmark in the segment. While the launch is still away, and complete details are yet under the wrap, here are some of the prominent features we hope to see in the X50 specs sheet.

Before we discuss the feature list, let us first go through the engine and transmission which will be available with the X50.

The Proton X50 will be based on Geely Binyue and is expected to borrow the 1.5-litre unit from the same. Transmission duties will be carried out by a 7-speed DCT gearbox. As for Geely Binyue, it also available with a 1.0-litre, three-cylinder turbocharged unit in China, though Proton will launch the X50 with a single 1.5-litre engine only.
Proton X50 price in Malaysia (expected)

While the complete price list will be revealed at the official launch, according to estimates, the sub-four meter SUV could be launched at a price point of RM 75,000. The SUV will be heavily localized, which would help curb its pricing. Moreover, at this base price, the X50 is expected to give its rivals a run for their money.

The mundane halogen units are old-school now, they have been replaced by the more appealing and slick LED units, which are found in most of the modern vehicles these days. Proton X50 is also expected to follow suit and get the LED-equipped headlamps accompanied by LED daytime running lights. Moreover, the quintessential infinite weave grille would also be a part of the pack.

Among other prominent exterior features, we also hope to see a panoramic sunroof on the equipment list. However, it could only come with the top-spec trims, skipping the entry-level variants. Some of the models in the segment are available with a sunroof (only range-topping variants), and Proton X50 will also get it hopefully.

Modern infotainment units have gained immense popularity in the last decade. It is a must in all the vehicles, irrespective of the segment they belong to. A large touchscreen display is not only convenient, but is also easy to operate. This feature is common in all the vehicles in the segment, and will make a way into the Proton X50 as well. Though, there is yet no clarity on the display size, which we will get to know after Proton reveals the final list of features.

In the age of internet and smartphones, it is almost impossible to function without these gadgets that keep you connected to the outer world even if you do not step out of your home. Apple CarPlay and Android Auto are two most common smartphone connectivity features found in vehicle these days, and we hope to see at least of one them in the upcoming X50.

Another comfort feature Proton could offer in its small SUV is the automatic air-conditioner, though it is likely to be restricted to the mid-spec and higher variants in the carline. AC vents for the rear passenger would be another pleasant addition to the equipment list. The automatic air conditioner lets the user set the temperature which is automatically adjusted by the air conditioner. This is becoming a common feature in newer models, and is a part of the pack in most of the rivals.

Safety can’t be ignored and compromised, and hence the upcoming Proton X50 is expected to come with a host of bits to ensure minimize injuries in case of a collision. Features that are expected to be standard include anti-lock-braking system, brake assist, electronic brakeforce distribution, ISOFIX, seat belts, front & reverse parking sensors, auto brake hold and airbags.

An autonomous emergency braking is usually accompanied by forward collision warning. This feature uses a radar which alerts the drive on detecting a potential front collision, and applies brakes automatically to reduce the impact. It is usually available only with the higher variants in the line-up.

Driving for long hours could be tiring, and exhausting at the same time. However, with an adaptive cruise control aboard, things could be curbed a tad as it helps maintain a safe distance from vehicles in front. Just like other advanced driver assistance features, this one could also be reserved only for the range-topping grade.

The safety technology used in cars have advanced over the years, and blind-spot detection is one such example. It monitors the blind spots and alerts the driver when a vehicle comes nearby. We usually see this feature in the new breed of cars, and hopefully, it will be on the X50’s feature list as well.

As mentioned earlier, the Proton X50 price is expected to be aggressive, which will give it an edge over rivals the segment. This could be easily achieved as X50 will be sold as a completely knocked down unit. The national car giant will ensure it prices X50 competitively to give it a good start in the segment or even undercuts arch-rivals. However, the actual price list will come out only after Proton reveals it officially at launch.

With these features aboard, X50 will surely slay its competition effortlessly, and competitive pricing will be a cherry on the cake. Hopefully, most of these features (if not all) will be a part of the kit. For more details, keep following this space for all the updates on Proton X50 launch in Malaysia.

Also Read: What Proton X50 might borrow from X70?