Proton X50: 5 Things we learned about the upcoming SUV 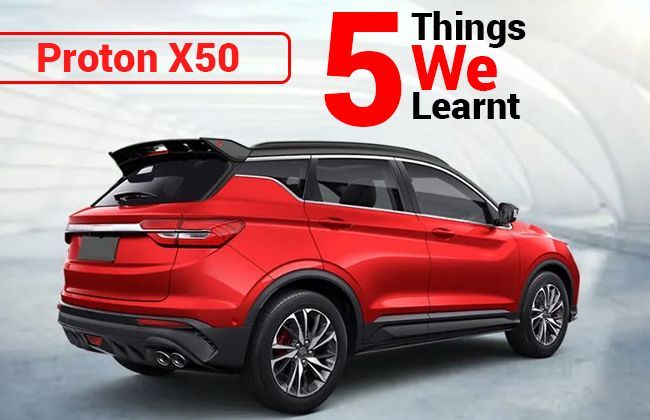 Proton X50 is trending, period. Within a short span of time, we would say it has become one of the most anticipated cars of the year. While this is certainly a good thing for the Malaysian car manufacturer as the X50 has gained a good amount of fame and that’s free publicity, however, this also means people’s expectations from Proton’s next SUV have risen. So, Proton has to ensure that the X50 is next to perfect and considering these five things that we have learned about the X50, we think Proton would.

Proton X50 will be based on Geely Binyue/Coolray

It seems that the Proton-Geely partnership is working wonders for the former brand. This partnership’s first offspring was Proton X70 which was based on Geely Boyue. It wasn’t just the first car of this partnership, but it was also Proton’s first-ever SUV. And fortunately, it did great. In fact, its demand rose such that Proton had to increase its production capacity. Now, the upcoming X50 is following suit. Proton X50 will be based on Geely Binyue/Coolray and thus have a plethora of common parts, components, and features.

To ensure the X50 is different from the Geely and has (at least) a few original features, Proton will borrow elements from X70 and use them in the X50. For example, the front grille of the X50 won’t be taken from the Geely, instead, Proton will use its ‘infinite weave grille’ which we have already seen in the X70.

Which front grille design do you like more, Proton’s ‘infinite weave grille’ or Geely’s, which is present in the Coolray? Let us know in the comments.

Proton X50 would get only a single engine option

Geely Coolray comes with two engine options - a 1.0-litre turbocharged engine that churns out 134 bhp of max power and 205 Nm of peak torque and comes mated to a 6-speed gearbox, and the second engine option is a 1.5-litre engine that has 174 bhp and 255 Nm of torque coupled to X70’s 7-speed DCT. While these engine and transmission combinations are available in the Geely, speculations say that it would be the bigger 1.5-litre engine to be added in Proton X50 specs sheet and used as the sole engine option. Proton would also implement different driving modes in its upcoming compact SUV.

Proton X50 will have a 10.25-in infotainment system

Just like the exterior, the interior design and features of the X50 will be similar to the Coolray’s. Some of the interesting features that are likely to be included are-

For infotainment, there will be a large 10.25-in touchscreen display which would run on Geely Key User Interface (GKUI). It would feature voice commands or voice control functions that could be triggered by saying ‘Hi Proton’. There will be provisions to connect smartphones with the system but we think Android Auto and Apple CarPlay would be left out.

Proton X50 price and its rivals

Although Proton has not given us an exact launch date, it has confirmed that the X50 will be launched in 2020. And when that happens, it will compete against Ford EcoSport, Honda HR-V, Toyota C-HR and the likes. Regarding Proton X50 price, it is being said that it would carry a starting price tag of somewhere around RM 75,000 mark. If that turns out to be true, the X50 would become a really tough contender to defeat.

These were the 5 things that we learned about Proton X50 so far. We are expecting to gain more information in the coming few weeks. Who knows, Proton might just launch the car. So, for all the latest updates, stay tuned to Zigwheels Malaysia.