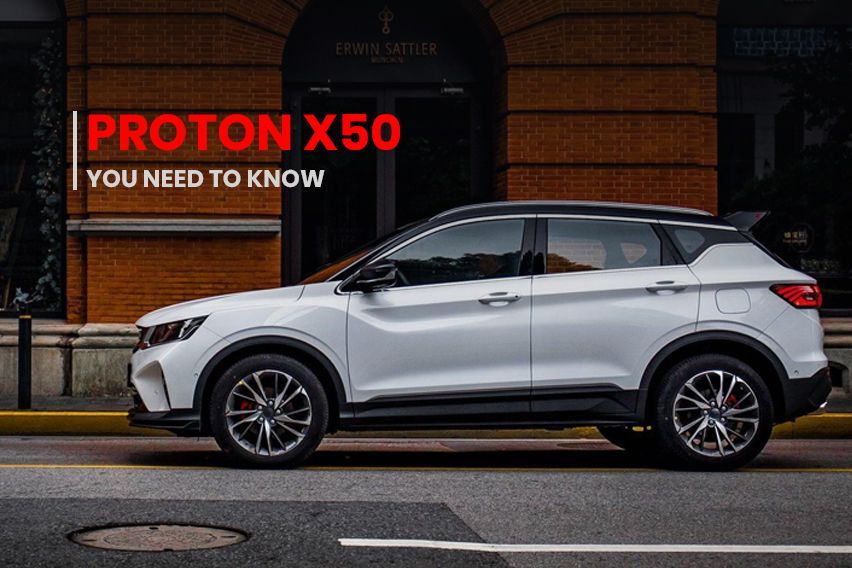 The Proton X50 nameplate has finally come into existence, after months or shall we say years of speculation. For those of you who aren't aware, Proton revealed the first official images of the X50, and a few days later, just before Malaysia Day, the car was previewed at the Tanjung Malim, Perak, the same place where it will be assembled.

Yes, the Proton X50 will be a locally-assembled car benefiting the nation's automotive part suppliers and, of course, the country's economy.

We'd also like to inform you that the Proton B-segment SUV is now open for bookings at a marginal fee of RM 500. And not to forget, you can win exciting prizes by participating in the X50 slogan contest, information on which is available on Proton's website.

Now let's get started on the important facts/information on the X50 that a buyer can not miss.

1. The Proton X50 will be offered in two engine options

Until the official preview of the Proton X50, it was a general belief that the B-segment SUV would come with only one engine option. However, now we know that there are two powerplants options - 1.5T for Standard, Executive, and Premium trims, and a 1.5 TGDi for the range-topping Flagship model. The latter makes a maximum power of 177 PS at 5,500 rpm and a peak torque of 255 Nm at 1,500 to 4,000 rpm. The 1.5T mill is the one whose existence was revealed at the preview event last week. It is a port-injection version of the 1.5 TGDi 3-cylinder turbo unit and makes 150 PS of power and 226 Nm of torque.

One of the most crucial pieces of information about a car after the price is its fuel economy. Well, recently, Proton, in one of an inclusive preview event, revealed X50's claimed fuel consumption figures. The 1.5T power plant that'll house the B-segment SUV's Standard, Executive, and Premium variants will deliver 15.4 kmpl. At the same time, the range-topping Flagship trim has a claimed mileage of 15.4 kmpl.

It is to be noted that the automaker did not mention the cycle used for the claimed mileage figures, however like the X70's we expect the combined cycle, Malaysia Automotive, Robotics, and IoT Institute (MARii).

At the recent Proton City Preview event, the automaker once again confirmed the X50's power figures. It said that both the engines - 1.5T and 1.5 TGDi would send the drive to the front wheels via a seven-speed wet dual-clutch transmission, the one previously seen in the X70 SUV. It is also no less than good news for the future X50 owners, as this gearbox is known for its performance and reliability.

This one comes as a bit of a relief, especially knowing that the X50 is a re-badged version of the Geely Binyue. The automaker has said that it has done more than just swiping the steering wheel from left to right. As many as 406 unique parts are fitted in the car, and it'll have 40% local content by launch.

Further, assuring its upcoming B-segment SUV local fit, Proton has revealed that the car has completed 1.9 million km of local road testing and has spent 750,000 man-hours on testing.
It's to be noted that the car is still under the development phase, as Proton is testing it, making sure it is a perfect local fit.

Do you know that the X50 will pack the Adaptive Cruise Control function? Well, the benefit of this function is that it allows the car to do a bunch of activities automatically, like stop, follow, and turn, all while keeping it in the lane with steering assist. Like the X70, it works at speeds up to 150 kmph.

Proton has also fitted the car with a parking assist system that allows autonomous perpendicular and parallel parking moves.